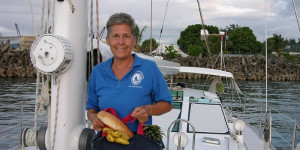 Adventurer and author circumnavigates the globe over a 10-year journey

Doann Houghton-Alico retired from her corporate job at 60, went sailing around the world, and wrote a book about her adventures.

In New Delhi to promote her latest book, Voice of a Voyage: Rediscovering the World During a Ten-Year Circumnavigation, award-winning writer and adventurer Doann Houghton-Alico recounted her adventures at a talk hosted by The Himalayan Club last Thursday, July 17.

After retiring as CEO of a technical writing corporate firm, she along with her ex-Pilot husband embarked upon a ten-year circumnavigation of the world in 2001, sailing over 43,000 nautical miles, through 41 countries.

Doann gave an animated account of how their main sail got caught in a wind generator and splintered into pieces. With winds blowing at 150km/hr in that area, and a husband with hypothermia, Doann had to take over and steer their way out of the storm. “It was a time when we were literally between a rock and a hard place,” she says of the experience that had her surrounded by obstacles. She’d hold her breath every time the bow went under a wave, until it came back up again.

The journey that started at Fort Lauderdale in Florida took them through 41 countries – the Panama Canal to the Galapagos; to French Polynesia, New Zealand, Indonesia, Malaysia, Thailand, Sri Lanka, Yemen, the Canary Islands, Barbados and the Bahamas – to name a few. All they knew at the beginning was that they wanted to sail west. They completed their quest in 2010, and as a result of their circumnavigation, have been invited to join the renowned Explorer’s Club.

Doann spoke of solitary nights while on watch (10pm – 3am every night) when she’d feel the loneliness of the seas with just the moon as company. She eloquently described magical moments of watching jellyfish sparkle under calm waters. She and her husband would party with other “cruisers”, snorkel and explore in kayaks – making retirement sound like the adventures of a 20 something wanderer.

The stories that inevitably form after a ten-year journey such as this have been compiled into two books, Dancing Fish, partly a travel narrative and partly poetry (published in 2011) and Voice of a Voyage: Rediscovering the World During a Ten-Year Circumnavigation (published in June 2014 by Sunstone Press in the U.S.A and available internationally on Amazon.com).

Apart from writing books, she also maintains a regular blog. She currently lives with her husband in the Rocky Mountains, Colorado, U.S.A.