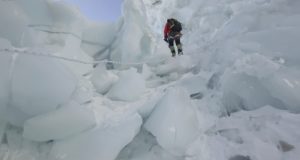 Since late December 2016, Basque climber Alex Txikon has been in Nepal attempting to become the first person to climb Everest without supplemental oxygen entirely in the winter season.

Despite reaching an altitude of approximately 7,950 meters on his first summit push, poor conditions forced Txikon and his team to retreat.

UPDATE: Take two! After high winds repelled Txikon and company’s first summit attempt, the team traveled to Kathmandu to recover and regroup. Now word has come that they are heading back to Everest for another shot.  On February 16, Txikon reported on Facebook, “Next week we will return to Base Camp, stronger than ever, and with all the experience [acquired] in all these weeks. If you follow your dreams, everything is possible.”

The expedition has taken a toll on Txikon. He noted on Facebook that, since his arrival in Nepal in late December 2016, he has lost 12 kilograms. But he and his climbing partners are still motivated. As he told The Outdoor Journal last month: “We’ll try to do our best as a team, as a group of people. Always trying to smile and stay positive.” Check back here to find out how they fare on the second attempt!

Alex Txikon has abandoned his first—and potentially only—summit bid on Everest for the 2017 winter season.  A small weather window opened earlier this week, allowing him to mount an attempt.

In a Facebook post, Txikon said, “After reaching [Camp 4], the wind hasn’t given a truce and we have just gone down to the [Camp 3] until the storm subsides. Soon, more news.” Camp 4 is located at approximately 7,950 meters.

Warm in his sleeping bag in Camp 3 (approximately 7,050 meters), Txikon offered further reflections on the failed summit bid in another Facebook post: “It has been a hard day fighting against the wind with all our willpower. At times, it has become a tougher battle than the summit attack of last winter [on] Nanga Parbat. […] For the moment, as I have mentioned earlier, we have descended to [Camp 3] (low) and we have not given up for anything in the world. The only thing we have done is to respect the nature that today was not waiting for us up there. At this hour I do not know what we are going to do tomorrow because I really do not know if we will be able to sleep now… but, as always, I will keep you informed of everything. Thank you very much for being up to the challenge.’

Txikon is trying to become the first person to climb Everest wholly in winter without the aid of supplemental oxygen. While Everest was summited without bottled oxygen by Ang Rita Sherpa on December 22, 1987, it has never been climbed without oxygen entirely in calendar winter (December 21 – March 21).

Still unknown is whether or not Txikon and company will have enough time, luck, reserves of energy and drive left to mount another attempt. When The Outdoor Journal spoke with Txikon several weeks ago, the Spaniard said that the expedition’s permit was valid until approximately March 10. If another stretch of clear weather presents itself, another summit bid could occur.

But time is running out. And with a pursuit as unpredictable as high-altitude winter climbing, second chances are far from a given. Compared with the thousands of individuals who have summited at least one of the 14 peaks in the world over 8,000 meters, only 27 people have “stood on the summit of an 8,000-meter peak in winter,” according to Marcello Rossi’s profile on Simone Moro at Climbing.com. Rossi also notes that the success rate for winter expeditions to 8,000-meter peaks is a paltry 15%.