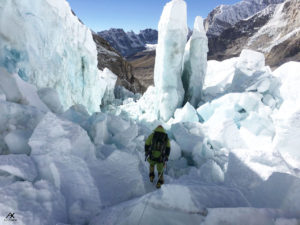 Climbing Everest in Winter Without Oxygen: A Tall (and Cold) Order

Spanish alpinist Alex Txikon is attempting to do something no one has done before: climb the world’s tallest mountain in the middle of winter without supplemental oxygen.

Climbing an 8,000 meter peak in winter is amongst the most dangerous things an athlete can do. One has to be willing to push his body to its absolute limit in one of the most inhospitable environments on earth. Yet somehow, 35-year-old Spanish alpinist Alex Txikon loves it.

Over the next two months, Txikon will try to become the first person to climb Everest in winter without bottled oxygen. (Everest has been climbed fully in winter only once before: in February 1980 by the Polish climbers Leszek Cichy and Krzysztof Wielicki, but it has never been summited without supplemental oxygen in the coldest months.*) Since the first ascent of Annapurna by Maurice Herzog and Louis Lachenal in 1950, each of the world’s 14 peaks over 8,000 meters high has been climbed many times, and all but K2 have even been climbed in winter. Aside from the first winter ascent of K2, Everest in winter and without artificial oxygen is perhaps the most alluring unclaimed trophy in high altitude mountaineering.

The Outdoor Journal spoke with Txikon—who is already a month into his expedition—via phone from Everest Base Camp.

“I’ve been thinking about trying Everest since the winter of 2014-2015, when Ali Sadpara and myself made a good attempt on Nanga Parbat,” Txikon says.  Though he first conceived of the expedition while at Nanga Parbat, he didn’t actually begin planning the trip until this past summer.

“I started thinking about it in June or July,” he says. “I was climbing in Basque country everyday, and I was dreaming of Everest. I’ve never attempted it, but if you check the statistics, of people who have climbed more than five 8000ers, Everest is often the first or second. But this was not my case.”

He attempted Gasherbrum I in 2011-2012 as his first winter 8000er. Unsuccessful, he returned the following winter. The trip ended in tragedy. According to Txikon’s website, “His three expedition mates disappeared at [7,700 m].” Again, he failed to summit.

His first winter attempt on Nanga Parbat with Ali Sadpara in 2014-2015, while a strong effort, was also unsuccessful. Txikon returned in the winter of 2015-2016 for another shot. Along with Simone Moro and Ali Sadpara, he succeeded in making the first winter ascent via the Kinshofer Route. Their climb was heralded as a milestone, as it was the last 8000er unclimbed in winter aside from the aforementioned K2. Looking for a new project, Txikon started hatching plans for Everest.

Txikon and his team arrived in Nepal for Everest in late December 2016. His main partner for the expedition was Carlos Rubio, another Spaniard. Joining them were eight Sherpa: Norbu, Chhepal, Furba, Pemba and Lakpa, all of whom are climbers; and Ghense and Nima, two “ice doctors” who help fix lines in the Khumbu Icefall and beyond. “We are a small team,” Txikon says. “Everyone knows what his job is.”

The expedition might be easier with more people “but it’s a much greater feeling of success when you do it in a simpler way,” Txikon says.

As of January 27, the team had ascended the route up to 7,800 meters. Getting to that point required over 4,000 meters of rope and something upwards of 80 ice screws, Txikon says. As they push the route higher, the climbers spend nights up on the mountain to acclimatize before returning to their camps at lower elevations to regroup.

Spending that much time high on the mountain in winter is extremely serious business. Temperatures reach bone-chilling lows, storms are more violent and unpredictable than in the summer or shoulder seasons, and retreat is difficult at best. In a blog post, Txikon explains how, 24 hours after returning from a stint at 7,500 meters, he still hadn’t removed his socks “for fear of not seeing my feet, thinking that they may be frozen. Now, they hardly hurt me, but the pain has been so intense that I have feared that everything will end here.”

Just recently, the team suffered a major setback. “Carlos unfortunately had to be rescued two days ago,” Txikon told me when I spoke with him. Carlos had developed a lung infection. In a blog post, Txikon wrote of the moment when he knew Carlos needed to be evacuated: “Something is not going well, Carlos has got worse, we have walked 10 minutes and it [costs] Carlos 5 times more [energy]; he barely walks 6 steps [in that time].”

Moments like this highlight the unavoidable dangers of winter mountaineering. Asked if he gets scared, Txikon says “Of course. I am always worried, you know? Like today, the Khumbu Icefall completely collapsed. And we’re alone up here. So we just have to do our best to solve the problems.” But it’s all just part of the experience, he says.

Winter climbing is a very slow process. Weather dictates when progress can be made. When not up on the mountain acclimatizing or pushing the fixed ropes higher, the climbers are often huddled around small radiators in their personal tents back in Base Camp.

And so Txikon has plenty of time to reflect; on what has already taken place, and what is yet to come. “I don’t know when we’ll set off on the [final summit] attempt,” he says. “We have like 70-80 days of permit time. I think we have until March 10 to try.”

Regardless of whether he reaches the summit, he’ll give it his all. “In my career, I think this is just one more step,” he says. “I’ll try to do my best. We’ll try to do our best as a team, as a group of people. We’re always trying to smile and stay positive.”

Txikon speaks again of how he is far from fearless up on the mountain. “I’m always scared at high altitude. Really hard conditions. Super cold up there.” But then he laughs. “But I’m super happy to have this job, eh? I’m super happy, believe me.”

*Note: To be clear, Everest has been summited in winter several other times after the Polish expedition, but since then it has never been climbed entirely between December 21 and March 21. Similarly, while Ang Rita Sherpa summited in winter without supplemental oxygen on December 22, 1987, the vast majority of the climbing took place in the autumn. Please see http://www.alanarnette.com/blog/2016/12/17/everest-winter-no-os-attempt/