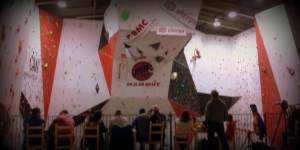 Another silver for Mani at IFSC Paraclimbing Cup

Manikandan Kumar came 2nd at the 2014 IFSC Paraclimbing Cup in Sheffield, UK and has won three silver medals for India so far this year.

The Bangalore-based climber came second at the International Federation for Sport Climbing (IFSC)  Paraclimbing Cup 2014 held in Sheffield, UK last Sunday. This win comes weeks after he shone with a silver at the IFSC Paraclimbing World Championship in Gijon, Spain.

This is Mani’s third consecutive silver at an international event this year, and his sixth consecutive medal in four years.

Thrilled with his win, Mani, an athlete backed by The Outdoor Journal said from Sheffield, “The finals route was quite challenging, but I was prepared and climbed almost to the top but could not reach the top hold. The crowd was upset when I missed it!”

“I think this was one of my best performances and I look forward to training harder to grab the gold medal next time,” he added.

The tournament was an IFSC organised event and managed by British Mountaineering Council (BMC), a national representative body of England and Wales that aims to promote and protect the freedom and interests of climbers, hill-walkers and mountaineers. It is headquartered in Manchester, England.