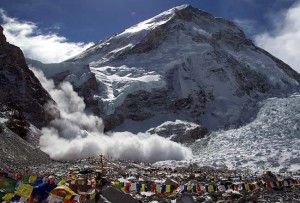 UPDATE: Death toll rises to 19; 61 injured and many missing on Everest as earthquake hits Nepal

Sources claim that an avalanche triggered by a deadly earthquake has killed at least 19 people at south side of Everest base camp, with 61 injured and several climbers missing.

The 7.9-magnitude earthquake has claimed thousands of lives across Nepal.

At least 19 people are feared dead after an earthquake triggered an avalanche near Everest Base Camp on Saturday morning.

According to the latest update received by The Outdoor Journal from Indian Army officials in touch with the Army’s Everest Clean-Up expedition, “19 people have died so far, and 61 injured. No Indians. Our doctor has been on the job ever since the tragedy occurred. We happen to have the best medical supplies and rations with us, are distributing it amongst the people here.”

The Indian Army had left for an Everest Clean-up Expedition earlier this month, taking on the route on the South side, via Nepal. The 34-member team is safe. They are now busy in search and rescue of avalanche survivors.

“Tents, mountaineering equipment, everything is buried under snow. Our boys are safe, ” he added.

Rescue operations are on as heli services are evacuating the critically injured from Everest Base Camp.

A second earthquake of magnitude 6.7 on the Richter scale hit north-east of Kathmandu near the border area of China. Climbers on the north side of Base camp said the tremors triggered avalanches on base camp on the north side.

A major earthquake hit central Nepal between Kathmandu and Pokhara on Saturday morning at 11:41:26 IST, killing hundreds of people across the Himalayan nation. The 7.9- magnitude earthquake took place 29 km ESE of Lamjung (210km west of Everest) and lasted a minute with seven tremors and 14 aftershocks. The tremors were felt as far as New Delhi in India.

Meanwhile, mountaineers at Everest Base Camp have put up posts on social media updating on events.

Indian climber Satyarup Siddhanta who is currently safe at Gorakshep sent a message from his Delorme GPS “major landslide from Nuptse face to Base camp. Major casualties at base camp as well as upper camps.”
https://share.delorme.com/satyarupsiddhanta

Danish alpinist Ivan Braun tweeted an hour ago ‘#EVEREST UPDATE: SHERPAS have found a relative safe route through the Khumbu Icefall. First people from C1 is reported to descent to safety’

“Friends and family, me and my team are safe here in Everest Base Camp. We experienced a very strong earthquake which brought down a huge avalanche as well causing many injuries. Many camps have been destroyed by the shake and wind from the avalanche. All the doctors here are doing our best to treat and save lives.”

Captain Tim Bradshaw of the British Army talks to Sky News about the moment the earthquake hit Base camp.
http://news.sky.com/video/1471991/surreal-moment-at-everest-base

We are trying to contact mountaineers in the Everest region for more specific updates. Please get in touch with supriya.vohra@outdoorjournal.in/editorial@outdoorjournal.in if you know anyone contactable in the region.