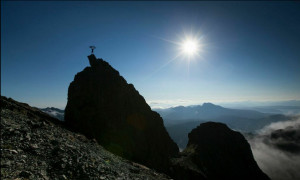 For the first time in India, the international adventure film festival brings some of the best outdoors, mountain, extreme sports short films across the country.

With Columbia Sportswear as title sponsor for the India leg, the tour will hit at least five cities – Delhi, Mumbai, Surat, Pune and Bangalore, starting this March

The World Tour of the Banff Mountain Film Festival, one of the best-known outdoors film competitions and presentations from the Banff Centre in Canada, goes across India in 2015.

This year’s exciting lineup includes Dan MacAskill’s seven-minute short The Ridge which became a viral sensation on YouTube shortly after it was released, and Vasu Sojitra: Out on a Limb, featuring the Indian-origin disabled solo backcountry skier.

The World Tour is an annual travelling collection of short films and documentaries on climbing, skiing, kayaking, biking, culture and the environment, and selects about 25 of the 60 films showcased at the Festival’s main venue in Alberta. Other films to be screened in India include the award-winning (festival-length version) of Valley Uprising, on Yosemite Valley’s climbing history; the inspirational Just Keep Running featuring Ruby Muir, and Desert Alpine, the Radical Reels People’s Choice Award-winner featuring Cedar Wright and Alex Honnold; among several others.

In previous years the Banff World Tour screenings were smaller events held only in Mumbai and occasionally in small venues in Delhi. However, India has seen a growing interest in mountain culture, outdoor sports and lifestyle in recent years, and for 2015, The Himalayan Club and The Outdoor Journal joined hands to take the screenings across cities to at least five cities in the country.
An early screening will commence in Surat on March 15th; the first main screening will happen in Mumbai on March 21st, in New Delhi on April 17th, with upcoming dates for Bangalore and Pune.

Speaking about the event, Divyesh Muni, Vice President of The Himalayan Club said, “Previously, the festival has had small independent screenings in one or two cities in India. This year, for the first time, we have widened our scope and selected five cities. Adventure enthusiasts are scattered throughout the country. We want to be able to reach out to as many as possible.”

Apoorva Prasad, Founder and Editor-in-Chief of The Outdoor Journal said of the film festival, “The outdoor lifestyle could be called a niche space in India, but there’s growing awareness and enthusiasm around it by an urban audience that knows what it wants – a better way of living. So far there’s been a dearth of the right kind of content to spread excitement in these audiences – and a film festival like the Banff World Tour, happening on a large scale in the country, is absolutely the right dose needed to showcase how epic adventures around the world can be.”

Khyati Bhinde, Vice President of Chogori India Retail (India’s representative of Columbia Sportswear) said, “We are very happy to partner with The Himalayan Club and The Outdoor Journal, and hope that we collectively offer good outdoor services to our customers.“

The full lineup and film screenings dates and venues across India can be found here.

From the Festival’s website
The Festival began more than 35 years ago in 1976 in the small Rocky Mountain town of Banff, Alberta in Canada. A tight-knit group of climbers and outdoor folk looked for an annual event to entertain them during the shoulder season between climbing and skiing. As the story goes, several late night meetings and a few beers later The Banff Festival of Mountaineering Films was born. What began as a one-day festival of climbing films, has now blossomed into a nine-day event in Banff and a year-round film tour which encompasses about 840 screenings on all continents, even Antarctica. Climbers, filmmakers, writers, and photographers from all over the world now recognize Banff as the key event in their mountain community.