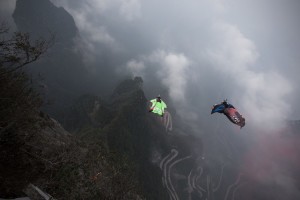 Wingsuit athlete and BASE jumper Jhonathan Florez died during a training session in Engelberg, Switzerland last Friday (3rd July 2015). Sources say that the 32-year old Colombian was training with two other athletes in a wingsuit formation flight. He was training for an upcoming championship in China.

According to a report on BlueSkiesMag.com, Jhonathan, who was jumping a prototype racing suit, was part of a three-way flight ‘off the Engelburg mountain exiting from the Titlis with an 8-10 second drop.’ The report further states that since he was the last to exit, there were no witnesses to his jump. His body was found at the base of the exit point, and it is speculated that he might have caught a burble or the suit interfered with his launch.

Jhonathan’s Facebook page was flooded with messages from friends and family. Fellow athlete Jokke Sommer wrote in a Facebook post, “I will never forget you brother! Flying will never be the same now that you bailed on us. Being on a trip with you was always painful after a while, but that was only because you made us laugh too much… Im deeply thankful that we got to share so many funny moments and crazy adventures together. Im happy I got to be a part of your life and watching you succeed on making your biggest dreams come true.. Everything from marrying your beautiful wife Kaci to becoming the best flyer in the world, signing with Red Bull, winning championships and shooting Hollywood films.. You made it all and you were winning at life! You inspired all of us with your unique way of being, life loving personality and positivity! It brakes my heart to accept there won`t be anymore Jhonny love in reality, but the smiles and memories will always be a part of me.

Thanks for being you and for everything you brought into our lifes Jhonny! I love you bro and I will deeply miss your spirit in the sky…”

The athlete, who was affectionately referred to as ‘The Birdman’ held 4000 skydives, 600 BASE jumps, 5500 wingsuit skydives and 600 wingsuit BASE jumps to his credit.

Apart from being a competitive athlete, Jhonathan also acted as stuntman for the upcoming Hollywood film Pointbreak.