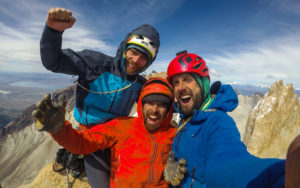 ‘The Belgian Beasts’ Send One of Patagonia’s Hardest Free Routes

They endured sub-zero temperatures and harsh storms, but also nabbed the first free ascent of an immaculate 1,200 meter granite climb with difficulties up to 5.13c. Their ascent stands as one of the hardest big wall free climbs to date in Patagonia.

Waking up on their nineteenth consecutive day on the wall, high on the Central Tower in Torres del Paine in Chile, Belgian climbers Nicolas ‘Nico’ Favresse, Sean Villanueva O’Driscoll and Siebe Vanhee were out of food. They were cold and tired of being lashed by wind and snow. Nico had already missed his flight home to Europe. And, perhaps most frustratingly of all, they were one pitch shy of completing the first free ascent of El Regalo de Mwono, a 1,200 meter route up the East Face of the Central Tower.

And then, suddenly, a break in the weather arrived. “When we woke up on day 19 we were like, ‘We’ll go down today,” says Nico. “We started getting getting ready to go down. But then it cleared up. Around midday the wind died down, the sun got warmer.” The climbers were drained, but the pitch was begging to be tried once more. They decided to give it one final attempt.

Nico and Sean have been climbing together for over 20 years. “We know each other really well,” Sean says, “We barely have to speak to communicate.” They are two of the most accomplished big-wallers around, and have taken their free climbing prowess (Nico, for example, established The Recovery Drink, a 5.14 single-pitch trad climb that is a contender for the hardest crack in the world) to blank rock faces hundreds of meters above the ground.

They have shared portaledges, cramped bivvies, sailboat cabins and all manner of other accommodations on their many expeditions together, from Baffin Island to Venezuela to previous climbs in Patagonia.

In 2006, Sean and Nico climbed the famous Riders of the Storm on the Central Tower in Torres del Paine, in Chile. Then in 2009, they upped the ante by making the first free ascent of the South African Route on the same tower. In 2011, Sean and Nico made a first free ascent on the East Face of Fitz Roy in Argentina in a marathon 30-hour push. Sean says they keep returning to Patagonia, and to the Central Tower more specifically, not only because of the grandeur of the walls, but because “the quality of the rock is just incredibly good for free climbing.”

It was while they were climbing the South African Route that they first saw El Regalo de Mwono. El Regalo de Mwono was first climbed in 1991-1992 by Paul Pritchard, Sean Smith, Noel Craine and Simon Yates at the grade of VI 5.10 A4. It had only seen one repeat in the intervening years, and neither of the first two teams had freed the climb. Sean say, “It’s a really obvious line. Pretty much a crack system from the bottom to the top, cutting the whole tower.” Neither Sean nor Nico had particularly high hopes of freeing the entire line—there were some very thin cracks that looked too difficult—but they reasoned that it would be a great adventure nonetheless.

To round out the team, Favresse and Villanueva O’Driscoll recruited Siebe Vanhee, a climber ten years their junior. “I’ve been looking forward to an adventure with Sean and Nico for a couple of years, so it was great to be with them,” Vanhee says.

After several days ferrying supplies to the base of the climb and fixing ropes up the first seven pitches, the Belgian team committed to the wall on January 31. They climbed “Capsule Style,” meaning they created a portaledge basecamp on the wall, and moved said camp higher only once they had made enough progress.

The advantage to remaining on the wall as opposed to retreating back to town to seek shelter was being able to climb at a moment’s notice. “A lot of the weather windows we had were only two or three hours,” Nico says, “which is enough to climb one or two pitches if you’re already on the wall. Sometimes there would be a snowstorm and then 30 minutes later blue sky, and you’d get hopeful, only to have bad weather again 30 minutes later. And sometimes this would happen three times in one day.”

After a few good weather days to start, intermittent snow and storms became the status quo. When the weather would break, they’d push their high point slightly farther. Somewhere in the middle of the wall they encountered what were clearly going to be the two hardest pitches. “The first hard pitch is a dihedral with lots of stemming,” Sean says. “No holds, mainly friction stemming, and a big hard move right at the end.”

The second hard pitch, which comes immediately after the first, consists of “very sustained face climbing,” he says. “It’s probably 5.13b or 5.13c.” Sean freed the first of these two crux pitches, but the second wouldn’t yield to any of the climbers’ attempts. The opportunities they had to try the pitch were few and far between. “Sometimes there was just one hour when the sun would start to heat up the rock a bit and the wind would die down and we’d have a chance to try it,” Nico says.

So rather than toil away on the lone pitch that was stymying their progress, they moved onwards and upwards toward the summit.

Portaledge-bound for long stretches of time, the climbers entertained themselves and kept sane in various ways. Favresse and Villanueva O’Driscoll have a penchant for “jam sessions,” as they put it, playing instruments that they bring up the walls on their expeditions. Villanueva O’Driscoll plays a mean tin whistle, and Favresse can hold his own on the guitar. Joined by Vanhee on the mouth harp, they turned the East Face of the Central Tower into the biggest concert stage on earth.  “We were playing pretty much everyday,” Sean Villanueva O’Driscoll says.

They brought up several books with them. “Mostly spiritual and psychology books,” Sean says. “I read all the books twice. I think Nico was the only one who was complaining about the books. He prefers novels.”

There was also a birthday party on the wall. Sean turned 36, and all three climbers crowded into one portaledge for a celebration, replete with popcorn and a jam session.

Nico says, laughing, “As a present we gave him some cannabis tea and some aphrodisiac powders to put in his breakfast. We ended up drinking the tea every morning, but honestly I don’t know if it had much effect.”

On their fifteenth day on the wall, the weather was impeccable. They pushed to the top on that day, February 14, nabbing the third ascent of the route. But they were still one pitch shy—the 5.13 crux pitch—of claiming the first free ascent. On the day they topped out, Nico says, they had the “equivalent of one day’s food left.”

There was some talk before about going down, but as a team we decided we’d try to stick it out as long as possible. 19 days was as far as we were willing to push it.

Three-and-a-half days of bad weather followed their successful summit push and made climbing impossible. On the morning of February 18, hungry, tired and planning on heading back to the ground, the weather cleared. “We had no food left, even after rationing for four days and barely eating,” Sean says.

“We just wanted to get down,” Nico says. But the possibility of finishing the free ascent was too alluring to pass up. “Staying and climbing was really the edge of masochism.”

With a short, two-hour window of clear weather and temperatures hovering around freezing, conditions were just good enough for Nico Favresse to send the crux pitch. With the first free ascent of El Regalo de Mwono complete, the trio started back toward the ground; still tired and hungry, but thoroughly elated.

Over the course of their climb they had lost a lot of weight, endured numb toes and fingers for hours on end, and gone stir-crazy waiting in their portaledges. But the end result was all worth it. “It was a proper battle, a proper fight!” Sean says.

“For me the greatest thing about this trip is that it didn’t ultimately feel like a long time on the wall,” Siebe says. “We were up there for 19 days, but in the moment you’re so obsessed with the climb and trying to reach the top, that time passes completely differently. It was a really complete trip and adventure, in the end.”