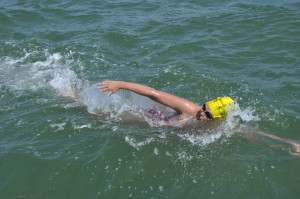 Ultra marathon swimmer Chloë McCardel completes three single crossings of the English Channel in under a week, becoming the first person ever to complete such a feat.

Australian ultra marathon swimmer Chloë McCardel has snared a new world first in the English Channel today, completing three separate English Channel crossings in less than a seven-day period. She had already completed two solo Channel crossings in the last five days on Monday(time of 8:52) and Thursday (time of 9:56) BST and started her third successful solo swim in a week at 2:30am Sunday BST, taking 9 hours, 48 minutes to complete.

Previously, Chloë set the world record for the longest unassisted ocean swim of 124.4km in 41.5 hours in October 2014, ratified by the Marathon Swimming Federation. (Read our exclusive interview HERE).

30 year old Chloë is now the first person to complete three single English Channel crossings in seven days. Although a large portion of the swim was in tough Beaufort Force 4 conditions, she bravely fought her way through the waves. Chloë is using these three single crossings within a week as training for her upcoming back-to-back triple crossing attempt (three back-to-back singles, weather dependent) in August this year. No Australian has ever completed such a triple crossing.

“Never in the history of our sport has a swimmer completed three single crossings in seven days. For 100 years swimmers were happy to have accomplished one crossing in a lifetime, but when the battle for the King of the Channel started between Australian Des Renford and myself in 1975, Des became the first swimmer ever to complete 3 crossings in a year. Thereafter, we each made 3 crossings a year until finally in 1979, I had to make 6 crossings to overhaul him and take his crown.  It is extremely rare for a swimmer to complete two crossings in a whole season which is four months long! Chloë’s two double (back-to-back) crossings in previous seasons prove she has the mettle to achieve this feat. I wish her all the best for this epic attempt”

This is Chloë’s 10th solo crossing, pushing her into “Double Digits” and into a very small category of swimmers who have swum 10 or more solo crossings. She is now just 9 crossings shy of Des Renford’s 19 crossings – the Australian record.

Checkout the Opening Feature exclusive on Chloë McCardel in Issue 08 of our print magazine, in stores next week