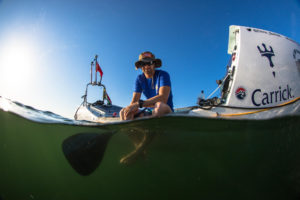 Big wave surfer Chris Bertish left the coast of Morocco three months ago on a custom twenty-foot-long stand-up paddleboard with an impossible goal: to paddle across the entire Atlantic Ocean.

Would he succeed? Would he even survive? On March 9, Bertish finished his crossing when he arrived in Antigua, and proved the impossible possible.

On Thursday, March 9, Chris Bertish landed on the Antiguan coast after 93 days spent stand-up paddle boarding across the Atlantic Ocean. Solo and unsupported, in his over three months at sea he crossed approximately 7,500 kilometers, made over two million paddle strokes, broke three world records and raised nearly $500,000 (and counting) for three charities: Signature of Hope Trust, The Lunchbox Fund and Operation Smile.

For the story of his unwavering optimism through raging storms and injuries, read about everything before the last few legs of this incredible journey here.

In his final “Captain’s Log” post on Facebook, Bertish writes, “The last 72 hours has been the most testing of [almost] the entire Crossing due to weather and the angles for the final approach.” But when he neared Antigua, and when he finally saw his support team for the first time in three months, the trials and tribulations all faded into the background.

“I see my part of my team, some close friends, my partner and my brothers and someone waving a huge South African flag and everyone starts going mental, screaming and cheering,” Bertish writes. “I raise my paddle with my one hand above my head and from deep within me like a primal roar from a lion staking his territory [as] King Of the Jungle, I let out a roar [so] deep, loud and of primal [descent]. It can be heard from miles…”

His feat is one that is unlikely to be repeated for a long time, if ever. World champion surfer Kelly Slater expressed his admiration and respect for Bertish and his feat on Instagram. “I’m not even sure how to say congratulations,” Slater writes. “How did you even come up with this idea?!”

Even though he’s back on solid ground, Bertish will still be occupied with Crossing-related things for the next year-and-a-half at least. He’ll be doing speaking events about the project, writing a book and continuing to raise money for the chosen charities.

But, for a few days at the very least, he’ll no doubt be recovering, resting and enjoying well-deserved time with friends and family.

To contribute to the charities Chris is supporting through his Atlantic campaign, visit http://www.thesupcrossing.com/donate/