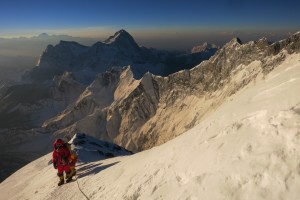 13 climbers, including nine Sherpas from different teams, have summited Everest this week after a two-year gap of no summits.

As other climbers make their way up to the summit this season, we take a look at the peak–the disasters, the environmental issues and the lure it still holds for the world.

After two consecutive years of disasters, the Everest climbing season this year has approximately 400 climbers attempting the peak in a total of 34 expeditions. Thirteen climbers so far, including Kenton Cool (a Briton who has now summited Everest 12 times) climbed the peak by the morning of May 12th, including nine Sherpas who opened the route and fixed the ropes to the summit the day before. Other climbers waiting in different camps will make their way up to the summit, depending on favorable weather conditions.

This is, of course, a much lower number when compared to the ‘good’ years. Many mountain guides have decided to take the year off, and big tour operators like Benegas Brothers Expeditions and RMI Expeditions have called off their Everest journey entirely this year. For some, it is a lifetime’s dream to reach the top of the big mountain. For many others, it is just a start of their devotion to the mountains and environment. Whoever climbs Everest usually learns a lesson from it.

Visitors on Everest are also right at the epicenter (after the North and South poles) of some of the impacts of global warming on the planet. Research scientists like this one often go on field campaigns to study Himalayan glaciers in the region.

The Outdoor Journal got in touch with a few well-known mountaineers to find out more about what’s happening on Everest, the current environmental situation and why it remains such a draw for climbers, despite there being many other technically more difficult and challenging peaks.

The mountain has been witnessing a series of disasters and uncertainties since 2013, the year that saw a highly publicized ugly fight between three professional climbers and Sherpas on the mountain; 658 climbers reached the summit that year. In 2014, an avalanche tragedy left 16 Sherpas dead on Everest; 130 people reached the top that year. Last year, 2015, was the first time in more than 40 years that the summit was untouched by humans when a 7.8 magnitude earthquake hit Nepal and left 22 people dead on Everest itself; just at the starting of the season. The Nepal government then extended climbers’ permits for two years after they were forced to abandon the peak.

Everest has been under the scanner for environmental issues as well as problems of overcrowding. It has been termed as the highest dumping ground in the world. In one report, experts have warned of excessive human faeces on Everest. Last year, The Washington Post reported that over 26,000 pounds (about 11,800 kg) of human poop is hauled down by local Sherpas every season. According to the report, Nepal’s government had mandated that every climber must bring down 18 pounds of waste with them or they stand to lose their $4000 deposit. But this system was not strictly implemented.

However, according to several adventure tour operators, the pollution state on Everest is not that deplorable. “The environmental impact of climbing Everest is generally minimal for those climbers and expeditions who take responsibility for their impacts and actively remove their waste and minimize their footprint,” Guy Cotter, CEO of New Zealand based Adventure Consultants told The Outdoor Journal over email. Adventure Consultants was established in 1991 by Rob Hall and Gary Ball, two New Zealand based world-class mountaineers. Cotter was involved in the rescue efforts on Everest during the 1996 tragedy where his close friend Rob Hall died.

Adrian Ballinger, head guide at California based Alpenglow Expeditions and six-times Everest summiteer told The Outdoor Journal over a phone conversation from Everest Base Camp, “The mountain is much cleaner than it was in the 1990s. Many teams have cleaned up the mountain. The only problem we face now is of human waste. Only about 10% of the teams bring down the human waste. The base camp is kept clean at all times. Cheaper expeditions are more responsible for the waste on the mountain as they try to cut cost in many ways like bringing fewer Sherpas and workers, so not all the waste is brought down.”

Adrian Ballinger and climber-photographer Cory Richards are climbing Everest this season without any supplemental oxygen. For Cory, “Everest is a very special place for me. My 2012 attempt on it failed and I wanted to be less of a visitor and wanted to experience how it like is to be at the top since then. I am planning to tell a compelling story through this attempt without oxygen and maintain the high standards of Everest. It should also help to weed out people less experienced people on Everest. I want to give the 360 degrees perspective from this expedition of the fun, efforts, physical, mental, emotional toll an expedition takes on Everest.”

For Adrian, it will be about pushing mind and body, and come down from it safely to give people a good understanding of a first-hand experience on Everest. The duo is Snapchatting their experience live along the way using #EverestNoFilter as hashtag.

“Due to more awareness among the local community, the INGOs, NGOs and the private sector, including trekking and mountaineering companies and the mountaineers put in great effort to clean the mountainous region,” said Ang Tshering Sherpa, founder and chairman of Kathmandu based adventure company Asian Trekking and President of Nepal Mountaineering Association.

“One of the good examples of the private sector’s effort made was the Eco-Everest Expedition,” he said, referring to the Eco-Everest Expedition an eco-friendly annual expedition starting in 2008, to attract global attention on the impact of climate-change on the mountain. Tshering further added, “Under the Cash for Trash program, Asian Trekking collected more than 15,000 kilos of old garbage, approximately 8,000 kilos of human waste and five deceased bodies from slopes of Mt. Everest for a dignified burial and funeral.”

In September 2015, Nepal Tourism proposed a set of criteria on age, experience and disability to restrict the number of people attempting Everest. While the proposal did face questioning by the mountaineering community, there was general consensus that restrictive measures were required to control the number of people attempting Everest every season. A few adventure outfitters have also taken the responsibility to make the climbs smaller, with fewer clients, thus also safer and carbon-neutral.

Guy Cotter’s Adventure Consultants operates on Everest with a maximum guide to climber ratio of 1:4, and a minimum of 1:1 climber to Sherpa ratio and the group are limited to 8-10 climbers each.

“We believe in leaving behind as small a footprint as possible by employing the use of solar power in base camp and on the mountain.  We remove our human waste from Base Camp and Camp 2, we remove all our rubbish (and regularly that of others) and we bring all our oxygen cylinders down from the mountain. We donate annually to the Dzi Foundation which does fabulous work to benefit local communities and we have our own Sherpa Future Fund that provides education scholarships to families who have lost their fathers and breadwinners in the mountains. We strongly believe in investing in our local staff in Nepal and we provide training and education for our staff, such as climbing training, NOLS Wilderness First Aid Responder courses, cooking training and English lessons. We operate towards a philosophy of offering exceptional experiences to our clients while ensuring we act responsibly towards the well-being of our staff, and the social and physical environments we are privileged to visit on our journeys,” he told The Outdoor Journal.

Despite the risks, challenges and global concerns surrounding Everest on all these issues, it remains the world’s highest peak. And adventurers from around the world continue to seek the summit, seeking greater challenges for themselves on Everest, be it climbing the mountain without oxygen, skiing down the mountain from the summit or climbing it alpine style.