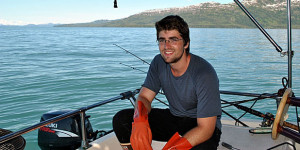 Where is Cody Dial?

Having embarked on a five-day hiking trip in the Costa Rican jungle on July 10th, nobody has heard from him in over a month.

“Cody Dial, the 27-year-old son of Roman and Peggy Dial, has been missing in a gnarly expanse of Costa Rican jungle for about a month now. Roman is a legendary Alaskan scientist and wilderness athlete who has been my friend for more than 30 years. The first time I ever went to the bus where Chris McCandless died, I biked there with Roman. He and Peggy are desperate to find Cody. If you have any tips about his whereabouts, please let me know”- Jon Krakauer, author, Into the Wild.

A 164-mile wilderness of mountains, beach and dense forest, Corcovado is Costa Rica’s largest and most ecologically diverse landscape. Cody grew up exploring the Alaskan wilderness, and like his father, is a wilderness and survival expert. He was alone and told his parents that he meant to hike illegally off the permitted trails. In pursuit of a Master’s degree in Environmental Science Alaska Pacific University, he took a break in order to hike across national parks in Central America.

On July 23rd, his father, National Geographic explorer and expert to NG expeditions and legendary footracer Roman Dial traveled to Costa Rica with two friends without guides to search for him. Roman and his wife Peggy, instilled a love of the outdoors, exploration, and survivalism in their son, Roman, who grew up an experienced hiker. At 17, he became the youngest finisher of a 160-mile mountain race in Alaska.

According to the Tico Times, there are various rumors circulating in southern Costa Rica’s Osa Peninsula about what happened to the 27-year-old. While the search continues in Corcovado National Park, some local residents have claimed they saw Dial hiding out in gold mining camps or chatting with known criminals. However, Dial’s father believes his son is still inside the park, fighting to survive.

Dial told Men’s Journal, “I’ve been here for three weeks. I’ve spent a third of my time dealing with the bureaucracies, a third of my time in the jungle looking where he may be stuck and another third of my time interviewing people who saw a lone gringo. There’s this group of miners who spoke with somebody at this really remote trail, this kind of hidden miners’ trail, where a gringo was cooking breakfast. One of the miners spoke English and they sat and had a conversation and he described my son’s equipment and it just sounded like him, my son Cody Roman. That was him”.

As Roman mentioned to the Tico Times, “It is hard for me to be here and not know what is going on. I am constantly reminded of the lifetime I’ve spent with him wandering the tropics. Maybe he’s murdered. Maybe he’s still stuck out there in the mountains and surviving in some inaccessible area. A week ago I was more sure than I am now.”

According to the Alaskan Dispatch News, Peggy Dial, Cody’s mother, indicated it should now be reported that Cody is no longer missing. She reported, “Good News! Cody Roman was seen on the 21st and Roman is following confusing leads! Getting closer to our boy!”

The Dials are asking that checks be sent to Margaret Dial at Alaska USA Federal Credit Union, PO Box 196613, Anchorage, AK, 99519. All checks should say “Cody Roman Dial Donation Account” on the memo line. All donations will go toward defraying costs associated with the Dials’ search.