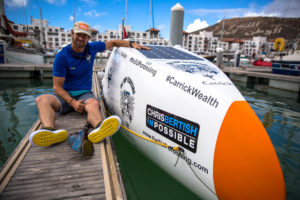 Chris Bertish has spent nearly three months attempting to cross the Atlantic Ocean on a stand-up paddleboard, alone and unsupported.

He has endured injury and raging storms, but has exuded optimism the whole while. And now, less than 750 nautical miles away from the coast of Antigua, he’s almost done.

Chris Bertish is a consummate big wave surfer, and has ridden some of the biggest swell on the planet. In 2010, at the Mavericks Big Wave International competition, he rode the largest waves in the event’s history to victory.

But over the past three months, Bertish has been piloting not a surfboard, but a Stand-Up Paddleboard; he has been surfing not single massive waves, but gliding across a seemingly endless sea. And now, approximately 80 days since he last set foot on land, he is on the verge of completing a seemingly impossible feat: SUPing, solo and unsupported, across the expanse of the entire Atlantic Ocean.

Bertish, 42, embarked on his expedition, The SUP Crossing, on December 6, 2016. According to his website, it would involve “Paddling the equivalent of a marathon every day for 120 days,” and take him some 7,500 kilometers from Agadir, Morocco, his port of departure, to Antigua, his final destination.

On February 21, Standup Journal reported that Bertish was only 750 nautical miles (just under 900 miles) away from Antigua. If — or rather when — he finishes, he will add one more first to an already impressive list of records he has racked up along the way. At present, his estimated date of arrival in Antigua is March 9.

In addition to very soon being the first person to have completed a solo, unsupported SUP crossing of the Atlantic, a mere 16 days into his journey Bertish set the record for longest continuous distance ever paddled on an SUP in open water, at 300 miles. He also set the world record for the greatest distance paddled in 24 hours– twice, for that matter. On February 15, Bertish set a new record by paddling 50.03 nautical miles (57.57 miles) in a single day, only to break it the very next day by paddling 62.54 nautical miles (71.96 miles).

In a press release about his 24-hour record, Chris was quoted as saying: “I’m very happy with the new record. I’ve been searching for those perfect conditions, that perfect 24-hour weather window for the last 72 days, but I knew once I found it I could crack the mile mark. […] It just goes to show, if at first you don’t succeed, try try and try, persevere, never give up. I’m looking forward to taking a couple hours break, before getting back out there and paddling again. I still have 750 nautical miles to go and millions of lives to change, that’s why I’m here.”

“But how does he sleep on an SUP?” you might be asking yourself. For those scratching their heads as they picture Chris lying down pencil-like trying to catch some Z’s on a traditional SUP as water splashes over his face, rest assured this is not the case. Bertish is in a custom-built craft, the ImpiFish, which looks more like a jetski on steroids than an SUP to the layman. But a stand-up paddleboard it is. The craft is nearly six meters long and weighs in at 600 kilograms when fully loaded with all of Bertish’s provisions and supplies. It has a cabin for storage and sleeping, and is solar-powered so that Chris can remain in contact with his land-based team, to transmit updates and receive weather forecasts, for example.

Recounting Bertish’s world records and the highlights of his Crossing is essentially like listening to a Greatest Hits album, though: it glosses over all of the bombs and filler tracks, or in his case the day-to-day goings-on, near-misses and other savory details. Sifting through the semi-regular “Captain’s Log” posts that Bertish has shared on social media through the duration of his trip illuminates these other aspects.

In his December 22, 2016 Captain’s Log, Bertish writes: “Been a pretty intense & scary past 7 days dealing with some system issues on the craft, broke my main foot steering systems and Autopilot went down, amongst others, bad cut to the finger after being trapped in a line, around my rudder, while underwater doing repairs, a major storm with 5.5 meter waves & 35 knts of breeze for 2 days/nights just off the rocky coastline of the Canaries, but I’m now finally through the worst of it..& have managed to manage the many crazy and life threatening challenges and find many new solutions, stay calm, focus to help me get through all of the issues.”

Injuries in his nearly three months at sea have not been limited to nicks and cuts on his fingers. In a more recent Captain’s Log from February 10, Chris notes that his litany of ailments include a “torn shoulder muscle,” a “strained finger tendon,” a “damaged rotator cuff — now needing surgery when I finish,” and plenty of issues with his hands and legs. Such are the costs of paddling upwards of 12 hours per day for months on end.

The challenges he has faced (and continues to face) include powerful storms and rough seas (at times capsizing his SUP when rogue waves sideswipe the vessel); dangerously low stores of food (“I am short on rations for the last 23 days as I am presently becalmed and only able to paddle 25NM [nautical miles] a day,” he wrote on February 14); and sea life bent on his destruction (his “ship” was stove not by a white whale as in Moby Dick but by a 15-foot Great White Shark!).

When he’s not setting records, troubleshooting, or just trying to stay alive, Chris is paddling, paddling, paddling and focusing on being in the moment. On February 20, Bertish wrote in a Captain’s Log, “Live in the moment, live in the now, take nothing for granted. Stop and enjoy the journey, before it’s over and gone, as it can all change in a heartbeat, as we all know… And that applies to everything in life my friends.” Clearly meant as a reminder to himself as much as to those he inspires, this also underpins one of Chris’ overarching philosophies in life: re-envisioning the word “impossible” as “I’m Possible.”

With under 750 nautical miles to go, Chris’ journey on the water is in its final exciting stages. Check back at outdoorjournal.com for further updates. To contribute to the charities Chris is supporting through his Atlantic campaign, visit http://www.thesupcrossing.com/donate/.