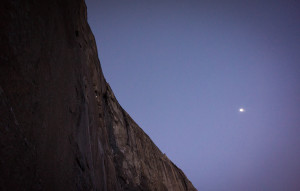 Tommy Caldwell and Ken Jorgeson top out on the world's first free-climb of the Dawn Wall of El Capitan in Yosemite National Park, USA.

The two summited just after 6:00 pm EST, where they were greeted by friends and family members, along with a group of reporters and sparkling wine.

The pair began climbing on December 27th and made steady upward progress. The normally wet lower pitches, the climbing rope lengths, were dry. Temps were cool ensuring ideal friction. Jorgeson split a tip, damaging his finger tips, but remained undeterred. They dispatched the initial 1200 feet to their basecamp. Then the climbing became hard.

Caldwell managed to dance carefully across a huge white dike feature, connecting two features. Kevin fired it as well. Caldwell dispatched the next few pitches in the dark. His experience having freed a half dozen other free routes on El Cap shone. He dispatched the continuing hard climbing.

But Jorgeson struggled. His skin split more. He kept failing at the end of the dike. The razor blade holds sliced his fingers. He could barely hold on. Caldwell could have gone to the top, easily making a successful ascent. Instead, he supported the man who had worked on the route for the past six year with him.

A few days ago, with tape covering his finger tips, Jorgeson stuck the credit card holds. He then made an enormous 8 foot sideways leap to join into Caldwell’s section.

“Momentum is a powerful force,” posted Jorgeson on Facebook. “When it’s on your side, everything feels a bit easier.”

The pair have a few more days, and the trials are far from over. When and if they top out, the pair will have cemented themselves as legends of climbing, having established the world’s hardest big wall free climb.

About the Author:  James Lucas began climbing in Yosemite 13 years ago and has spent nearly half his life in between the granite walls. His obsession with rock led him to a nomadic life. When he’s not chasing rocks, he bakes pies does stand-up comedy and writes. He dreams of free-climbing El Capitan in a day. He created our climbing Foldout on “Yosemite Valley” (photo by Jimmy Chin) in Issue#6 and wrote the Guidebook Feature on his experiences and the climbing culture of the area- “The Big Stone”.