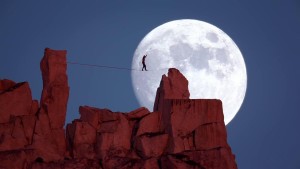 BASE-jumpers Dean Potter and Graham Hunt were killed while attempting a wingsuit flight in Yosemite Valley.

Always pushing boundaries, charismatic and handsome, Dean Potter was an artistic visionary. A huge influence on climbing for the past 20 years, Potter was a BASE-jumper, extreme climber, highliner and free spirit.

On Saturday evening, May 16th, Dean Potter and Graham Hunt climbed to Taft point, a 7,500ft promontory in Yosemite Valley National Park, and leapt. A spotter saw them descend into the dark valley with their wings open. None of their chutes deployed.

According to Outside, “Yosemite Search and Rescue (YOSAR) initiated a hasty search, but the rangers were unable to locate the pair overnight. Potter and Hunt had been attempting to fly along terrain that required them to clear a notch in a rocky ridgeline”. BASE-jumping is illegal in Yosemite National Park.

In 2006, his free climb of Delicate Arch in Arches National Park was criticized and controversial- it eventually cost him his sponsorship from Patagonia, the renowned outdoor equipment manufacturer. After the release of critically acclaimed adventure film Valley Uprising, nutrition company Clif Bar dropped its sponsorship with Potter, after nearly a decade.

Yosemite was Dean’s home. His spirit was deeply intertwined with that of the Valley. The rebellious culture of free climbing, BASE-jumping and rule breaking was very much a part of him. One of the most recognized figures in the world of extreme sports, Potter was known for his innovation. In 2008, he climbed the legendary north face of the Eiger in Switzerland alone without a rope, instead wearing a parachute on his back, dubbing it free-basing.

Nicknamed “the Dark Wizard”, Potter was one of the most experienced wingsuit BASE jumpers out there, practicing a sport that is widely considered to be one of the most dangerous in the world. He was a National Geographic Adventurer of the year, held numerous speed records and most recently, reached the summit of Half Dome in 1:19.

Mountaineer and photographer Jimmy Chin told The Outdoor Journal, “Every so often you meet someone who moves through the world with such intensity and power it’s difficult to comprehend them. Dean was one of those people. His strive to unlock the barriers of the mind were like nothing I’d ever seen. He lived by his own code. Some people might not ever get it and that’s fine. To me, he was never afraid to be himself, embodied integrity and a true wild spirit. Characteristics I treasure in people and characteristics Dean had in spades”.

James Lucas, an ace climber who has spent nearly half his life in between the granite walls of Yosemite, shared an anecdote with The Outdoor Journal, telling of Dean’s character. “We’ll send Peaches down last.” Dean Potter said in regards to rapping off the sketchy anchors on the Third Mary. “He’s the most expendable.” “I heard that! Mother F****r!” I shouted. We laughed. It was a light moment during the recovery of Sean Leary’s body. Dean, Jimmy Hayden, Jonathan Thesenga and I were the pallbearer’s, helping to bring Sean’s body back down from the thousand foot cliff. Sean died base jumping in Zion National Park in the spring of 2014. We met Graham Hunt at the base shortly after. Dean apologized later, telling me that he was only “just” kidding.

Potter is survived by his girlfriend Jennifer Rapp and his dog, Whisper, a blue heeler who has been a significant part of Potter’s adventure life.