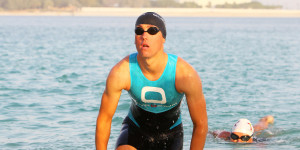 In five appearances at the Abu Dhabi Triathlon, Belgian Frederik Van Lierde finished in the top-5, with two wins. That’s great consistency. But wasn’t he supposed to win again this time?

Frederik Van Lierde, Ironman World Champion shared a few words with us about his recent reduced performance at the Abu Dhabi International triathlon. This is a little email Q&A we did with him after the race:

The Outdoor Journal: Tell us a bit more about what happened last weekend?

Frederik Van Lierde: The Abu Dhabi International Triathlon was my first goal of the season. The result is not what I expected, I agree. But, I tried a new tactic there, and it just didn’t work. Which one? Oh, I’m not going to tell you that! In the light of my accomplishment on the bike and swim, my performance and form remains very encouraging for me. I did most of the swimming ahead of the pack and managed to impose my rhythm on the other competitors, to get out of the water first. That’s definitely a success. On the cycling part, the weather was very good, with no wind. That lack of difficulty, in terms of wind and elevation, did not allow me to express myself fully and to make a major difference with the other cyclists. Despite several attempts I made to escape from the pack…..I just couldn’t. There were always 5 guys riding along with me. Then we all entered the bike park together.

The Outdoor Journal: What happened on the run? We were expecting you to outrun everybody!

Frederik Van Lierde: At the arrival in T2, like I said, we racked the bike more or less all together. On the run, I quickly realized my legs were making me pay for all the effort done on the bike. The race happened two weeks later than last year and the weather was much hotter. I managed to stay a long time in 4th position with the podium in focus. But, I just couldn’t make it. I finished 3 minutes behind the day’s winner Tyler Butterfield. The shape is there. This is a good lesson for my next races, my experience keeps building on, as this race represents a lot of parameters to analyze, to do better at the next ones.

The Outdoor Journal: Luc Van Lierde, your coach, said that when one has several objectives in one season, usually one of those goes down and cannot be accomplished. Are you afraid for the rest of your season?

Frederik Van Lierde: No, not really. Again, the lack of wind was a problem for me because that’s when I can beat anybody. Tyler Butterfield said that if the wind had picked up, he and the other cyclist would not have had a chance… I guess he’s right (laughing). You know, no one can win all the time, at all races. It’s just impossible. This race was a great experience overall; and I am getting a lot from this loss. I will indeed learn from it. I am Ironman World Champion and that feels great! Last season was pretty exceptional as I won it all, including the Ironman title, and this year it’s just a little bit different, so far. But I’ll be back in Hawaii again this October.

Frederik’s next race will be on April 13th at the Cannes International Triathlon, in France.