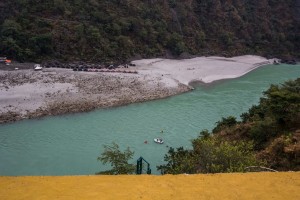 Do rafting camps on the Ganges cause ecological damage? Part 4 of 4

In the final of the four-part series, The Outdoor Journal seeks to answer if river rafting camps on the Ganges harm the environment.

River rafting camps on the Ganges in Uttarakhand in north India have come under fire after a petition filed by a non-profit alleged they cause ecological damage before the National Green Tribunal* (NGT), India’s top1 environmental court.

The stretch from Kaudiyala to Rishikesh in Uttarakhand is a popular area for setting up beach camps during the whitewater rafting season, from September to June (see map illustration above). The Outdoor Journal has carried out a four-part series of the issue, examining the rampant growth of this activity, exploring the petition and the charges, and the issue of ‘haphazard and unregulated licensing.’

In the final part, we take a look at what is being said about the environmental impact of river rafting camps on the Ganges.

The Wildlife Institute of India report of 2010

The Wildlife Institute of India is an autonomous institution under the Ministry of Environment and Forests, Government of India. In June 2010, it published a report, called A Rapid Impact Assessment of the Rafting Camps along the Kaudiyala-Rishikesh stretch of River Ganges, Uttarakhand.

The report is a one-day study of 34 camps, on the stretch between Kaudiyala and Rishikesh recommending which is good and which isn’t for the wildlife of the region.

The researchers did a one-day reconnaissance of the stretch on a jet boat, and made observations based on ‘relative sizes, natural setting and habitat features, presence and absence of wild animals.’

Although the report says that out of the 34 camps reviewed, 13 were not suitable for camping, it also states the need  for a more intensive assessment that covers (i) assessment of the ecological footprints of the camping activities and (ii) the economic valuation of nature tourism activities.

The issue of Dry Pits

Another issue mentioned in the petition is that of waste disposal. According to it, “The camps are located and established as temporary sites which do not have adequate sewage and sanitation facilities. At the camp sites either there is no toilet facility and hence people ease themselves in open or even where the toilet facilities exist, they are in the nature of pit disposal where the human discharge is allowed in a put. Once water level rises during rainy season, the camp are removed but the discharge remains which flows into the river. This not only pollutes the river but also interferes in the river ecosytem.”

Explaining the concept of dry pit waste disposal, sanitation expert Meraj Ahmad told The Outdoor Journal, “Dry pit systems are good as they do not use water for flushing. They include a range of different types of conventional pit latrines, ventilated improved pits, as well as ecosan toilets that involves the separation of faeces and urine at source and safe reuse of excreta.”

“The pit should be located at least 10 m away from the water source. Viruses normally die within three meters of the pollution source, irrespective of soil type. Bacterial contamination is normally removed given sufficient depth of unsaturated soil (at least 2 meters) between the pollution source and water-point,” he explained in an email.

Do riverside camps harm the environment?

The big question – does the presence of a beach camp – tents, dry pits, food arrangement for the outdoor enthusiast cause ecological harm to the environment?

Seema Bhatt, independent consultant on climate change, ecotourism, conservation and honorary Vice President of Ecotourism Society of India told The Outdoor Journal, “Any activity that is carried out in an ecologically fragile area has to follow certain guidelines and most definitely has to be restricted. Any activity that goes beyond the carrying capacity of the area, will result in the degradation of habitat and disturbance to wildlife. This is a general caveat that applies to all such areas, may it be rivers,  mountains, wetlands etc.”
“It is very clear that a more intense study is required on the basis it needs to be determined how many camps are even viable in the particular stretch of the river. The ones that do get permits would then need to follow strict guidelines. Permits need to be renewed based on whether these guidelines were followed in the last season,” she explained over email.

“We set up our temporary camps only on natural clearings, do not use running water nor electricity. Our dry pits are above the high wafer mark  70m away from the river in forest land with greater microbial activity. Moreover, 90% of the rafting outfitters are local entrepreneurs, and the industry today has provided  employment to over 5000 locals in various capacities in their camps, offices etc on the 36 km stretch between Kaudiyala and Rishikesh,” said Vaibhav Kala of Aquaterra, a 20-year old adventure tour operator based in Shivpuri.

“Our industry has stood for upholding the safety and environmental fabric of  Ganga rafting & camping, since its inception in the 1980’s.  Lack of policy and regulation has also contributed towards product-transformation and deterioration,” he explained.

“Any human activity on the beaches will change the natural ecology of an area. However, camps that are set up and dismantled with a Leave No Trace ethic should not cause lasting harm.  If tour operators are diligent about removing trash, and especially sewage and food waste, beach campsites should not be permanently affected,” said Mary McIntyre, freelance photographer and writer based in Utah, USA. She has kayaked and rafted extensively in the US, where there is a strict regulation for camping.

Currently, there is no clear publicly available policy or regulation on the issuance of camp permits on the Ganges.

The hearing is scheduled for 1st July.

Feature Image: The Ganges, the sand banks and the camps