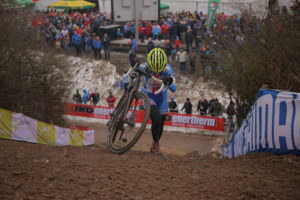 Belgium steals the show at the UCI Cyclo-cross World Championships in Bieles this weekend.

With flat tyres and tears, it was all excitement at the first world championship in Luxembourg in almost 50 years.

Another big day in cyclo-cross as Wout Van Aert successfully defended his title rainbow jersey after riding away from rival Dutch rider Matthieu van der Poel when his tyre punctured halfway through the race. Finishing 44 seconds ahead of Van der Poel and 2:09 ahead of bronze medalist and fellow countryman Kevin Pauwels, he more than made up for his slow start.

It was undeniable heartbreak for the Dutchman. In utter disappoint, “I did everything right and had the energy. I felt that I was the stronger one. It was bad luck”, says Van Der Poel. Even on his third flat tyre during the course, he was still convinced he would win the race.

Van Aert also addressed the frustrations of the technical sides of the sport and how it can affect the outcome. “I didn’t want to win this way”, he said at the press conference following the race. However, coming back from a knee injury himself, he also made the point that it is a part of cyclo-cross and he’s still happy to have won.

In the women’s elite race on Saturday, Belgium’s Sanne Cant finally claimed the title after falling just short in the previous two years. It was a thrilling last lap as the 26-year-old overtook seven-time world champion, Marianne Vos from the Netherlands.

A strong fight from behind was Czech Republic’s, Katerina Nash as she grabbed bronze.

“It’s an incredible day, the most beautiful day of my life,” Cant claimed after an intense win and beautiful celebration.

The women under 23, put on an incredible show Saturday—through more snow and ice than the elites. Mountain biker Annemarie Worst from the Netherlands won a hard-fought battle with the USA’s Ellen Noble, while defending champion Evie Richards crossed the finish line in third. All three women stressed the importance of their training in reaching the podium. That training being both on and off the bike and “using every aspect to make yourself better”, says Richards.

When asked about her bad luck in previous national title races due to injuries, Worst said “good luck in the world’s is better”, making it clear that this event is where it counted.

For all the results or more information on the hosting city, head to UCI Bieles and Visit Luxembourg.

All images © The Outdoor Journal