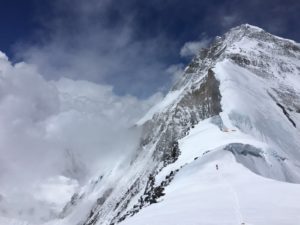 Now we’re in the thick of it.

Everest season is in full swing, and before long it’ll be over. On top of the hundreds of successful summits, the mountain has claimed a number of lives, been the scene of costly body recoveries, and been scaled at a blistering pace.

Our preview of the 2017 Everest season highlighted the lack of standardized prerequisites among Everest guiding outfits for potential clients, and after six deaths (plus four incorrectly reported deaths) on the mountain so far this year, prominent voices are adding their two cents to the conversation.

While preventable deaths have been one half of the story over the past two weeks, the other half has been a combination of successes, records, and debate over the Hillary Step (did it collapse or didn’t it?).

The first two deaths of the season, previously reported on by The Outdoor Journal, were Swiss alpinist Ueli Steck and 85 year-old Nepalese climber Min Bahadur Sherchan.

On Sunday, May 21, four more climbers perished on Everest. Dr. Roland Yearwood, an American member of the Everest Parivar Treks expedition, died from altitude sickness at 8,400 meters.  54 year-old Francesco Marchetti of Australia also succumbed to altitude sickness after falling ill around 8,600 meters. Marchetti was a member of the Adventure Thamseruku Treks expedition.

The third confirmed death of May 21 was Slovakian alpinist Vladimir Strba, 48. In 2016, Strba attempted the British Route on Everest’s Southwest Face with countryman Zoltan Pal. The pair was forced to retreat after encountering adverse conditions. They initially intended to attempt the mountain together a second time this year, but for unknown reasons Pal had to bail, leaving Strba to climb solo. Strba died near 8,000 meters.

The fourth death was unconfirmed until the body of lost Indian climber Ravi Kumar was found the following morning on Monday, May 22. Kumar, 27, was a member of the Arun Treks expedition. His body was spotted at the bottom of a crevasse some 200 meters deep and at an elevation of 8,400 meters. A mission to recover Kumar’s body, despite the unprecedented costs and risks it presents, is moving forward with support from the Indian government.

On May 24, The Himalayan Times reported that Sherpa from Seven Summits Treks had found an additional four climbers dead inside their tent at one of the higher camps. On May 25, however, Alan Arnette confirmed that these initial reports were wrong: “The best explanation is that the Seven Summits Treks Sherpas somehow ‘confused’ seeing one body and thinking it was four. Assuming good intentions here, perhaps an analogy with the ‘fog of war’ is apt.”

Arnette notes that, in addition to four less casualties, a silver lining to the confusion is the “conversation about the experience of climbers and the qualification of guides” that it has kickstarted.

Adrian Ballinger, who (along with Cory Richards) is currently staging his final summit push without supplemental oxygen, posted his thoughts about the incident on social media (when he still thought the climbers had died):

“Today we heard of 4 more unnecessary deaths on the mtn. This brings the death toll this season to 10, with a vast majority totally avoidable. It pisses me off. My condolences to the victims and their loved ones. But silence is not the way to respect their deaths. We have to demand standards from the guide/logistics companies working on Everest. And while the newer cut-rate local companies are a big part of the problem, western guide companies have to set an example. American companies on both sides of the mountain this week made poor decisions that endangered their clients. They were companies led by non-certified guides. I watched clients of an American company come off the mountain today with frostbite and a failed summit bid. There is no excuse. Weather forecasts have for over a week predicted the winds that decimated camps on both sides of the mountain on the 23rd.”

“Okay, so that’s what pisses me off. What’s the solution? 3 simple requirements: 1. Mountain guides should be AMGA/IFMGA certified. Experience is key. But experience should be built on education and examination. 2. Sherpa (High Altitude Workers) should be [Khumbu Climbing Center] or Nepal Mountaineering Association certified. 3. Clients should meet minimum standards of experience (30 days on crampons, 10 days on rock, 3x6000m peaks, 1x7000m peak, 1x8000m peak). We need to start calling out companies that [don’t] meet these standards. Sure, certified guides and Sherpa cost more. And sure, our group sizes may shrink if we require minimum standards from our clients. But there will be fewer deaths. And we will be able to be proud of our profession once again.”

Spanish ultrarunner Kilian Jornet set a new speed record from Base Camp to the summit of Everest. He reached the top in just 26 hours, tagging the true summit at midnight on May 22. Jornet climbed without the aid of fixed ropes or supplemental oxygen.

His record marks the final stage of his “Summits of My Life” project, throughout which he has attempted to “set ascent and descent records for the most important mountains on the planet.” Among the mountains that he has already set speed records on are Mont Blanc (4,810 meters), the Matterhorn (4,478 meters), Denali (6,186 meters), and Aconcagua (6,962 meters).

Jornet’s fair means ascent is the fastest known time from Base Camp to the summit. He hoped to log a new record for the fastest known time for the round trip from BC to summit, but ended his effort on the return leg at Advanced Base Camp because he was feeling ill. There have been faster ascents from Advanced Base Camp to the summit—Hans Kammerlander made the trip in 1996 in just 16 hours, 45 minutes, also without supplemental oxygen—but there are no faster recorded times from Base Camp proper, which adds a significant distance to the climb.

In a post on his Facebook page, Kilian’s team quoted him as saying: “Until I reached 7.700m I felt good and was going according to my planning, but there I started to feel stomachache, I guess due to [a stomach] virus. From there I [moved] slowly and [stopped] every few steps to recover. However, I made it to the summit at midnight.”

The rumor mill is already swirling with reports that Jornet has left Base Camp and is trying again for an even faster time.

Tragedy and records aside, there have been exciting moments on Chomolungma in 2017. In addition to the more commonplace commercial summits, Andy Holzer, a German climber, became the second blind person to reach the top of the world, and Polish alpinist Janusz Adamski started a firestorm after he made a rare traverse from the North of Everest, across the summit, to the South, but without proper permits.

Though the season is in its final throes, there is definitely still news to come. Will Adrian Ballinger and Cory Richards succeed on their “#EverestNoFilter” summit push? Will Nobukazu Kuriki succeed on the rarely-attempted Hornbein Couloir in the coming days? Check back at The Outdoor Journal for further updates.