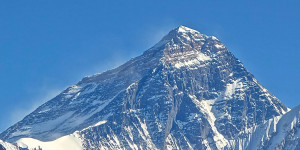 Authorities say heavy snowing, loose ice slabs could be cause of the natural disaster.

A day after a lethal avalanche struck the most used climbing route on Mount Everest, two more bodies of sherpa guides were recovered from the snow taking the death toll to 14 on Saturday.

In what is probably the world’s highest search and rescue operation at present at 5800 mts, authorities are searching through every possible bit on helicopter and on foot for  for three missing sherpas, Nepal tourism official Mr Mohan Krishna Sapkota said via phone from Kathmandu. He asserted that the search operations were still underway.

The three sherpas who surveyed the ordeal and were dug out alive from the heaps of snow are said to be recuperating at a hospital in Kathmandu and their condition is reported to be stable. Postmortem is being conducted on some of the avalanche victims and about five bodies have been handed over to their families for final rites, Mr Sapkota said.

He ascertained that there were no commercial climbers trapped above the avalanche zone or around it at present and everybody was brought down to Everest Base Camp.

As many as 450 sherpas and 400 climbers make their way up and down Everest’s dangerous slopes and negotiate numerous crevasses annually for what is considered the world’s most commercially adventurous mountain climb.

“The sherpa community and many western climbers have been rattled by this incident. Even the most seasoned mountaineer has not come across so many deaths in one day,” said Mr Ang Tsering Sherpa, President, Nepal Mountaineering Association.

He said prima facie the reason behind the avalanche appeared to be the result of constant snowfall for the past three days on the world’s tallest mountain and it’s surrounding areas. “There has been constant snowfall in that region for the past 3-4 days. The snow may not have settled well. Also ice slabs may have become unstable and must come off,” he added.

Mr Richar Salisbury, who operates the Himalayan Database (hyperlink) in Kathmandu told The Outdoor Journal that the April 17 avalanche was indeed the most devastating one to have struck on Everest in recent times.

“The maximum human toll in a single day in Nepal’s mountaineering history till now was in 2005 when 18 mountaineers had died on Kang Guru,” he said.

He added that since the first successful ascent in 1953, at least 87 sherpas have died on both (Nepal and China) sides of Everest.