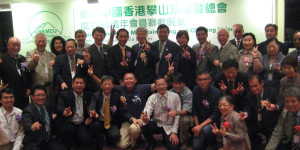 At the latest meet of UAAA in May, the Nepal Mountaineering Association gave a list of all measures it intends to undertake to support the families of the deceased Sherpa guides.

This includes financial support to families along with scholarships to ensure education of children.

The Everest avalanche that took 16 lives in the deadliest natural disasters on the mountain was top on the agenda for Nepal Mountaineering Association (NMA) at the annual council meeting of UAAA (Union of Asian Alpine Associations) held in HongKong on May 30 and  June 1.

The avalanche that occurred off the West Shoulder of Everest and swept between Khumbu Icefall glacier and Camp 1 at an altitude of 5800 mts took away 16 lives, out of which three are still missing. The deceased were Sherpa guides, who were heading towards Camp 1 carrying kilos of equipment on their back to set up camps and fix ropes for climbers of different expeditions.

NMA president Ang Tshering Sherpa said in the meeting, “All the Nepalese climbers who died and are missing in the avalanche are equal for the Nepal Mountaineering Association (NMA) and we don’t want any climber to be ignored in the course of receiving financial assistance.”

He declared that NMA had set up a special fund called Mountaineering Disaster Relief and Educational Support (MDRES) to receive donations from the world over. He claimed that the fund is to be used to support the families of the deceased mountaineers. In addition, children of the deceased are to receive scholarship and further financial support for completion of their studies till graduation.

In addition to this, the NMA has called upon the formation of a Rescue Cell. According to the association, climate change has made climbing the Himalayas more difficult with time. A Rescue Cell with trained and fully equipped Nepali personnel will be present in a constantly acclimatised state and dispatch immediately in case of an emergency. The meeting also discussed issues around waste management in the Himalayas where the NMA assured that the region is becoming cleaner with each passing year. “Each year as the ice melts and the glacier moves, any garbage that is uncovered on the surface is quickly collected and disposed,” Mr. Tshering was quoted saying in an official release from the NMA.

UAAA, headquartered in South Korea, is Asia’s highest governing body for all mountaineering, climbing and mountain tourism activities. The meeting was attended by officials of all national alpine and mountaineering federations of the continent