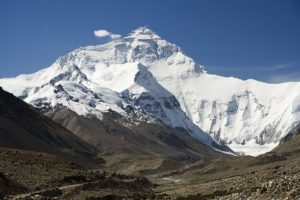 The world’s highest mountain is once again open for business.

The 2017 season has already seen tragedy and controversy at the world’s most coveted peak. Death, record crowds, and other things taking place have already secured 2017’s place in the Everest history books—and the summit attempts haven’t even begun…

The summit attempts for the 2017 Everest season have yet to begin, and already it is a season that will not soon be forgotten. There have been tragic deaths, unstable conditions in the icefall, extremely high winds, and even a contentious electronic dance music concert at Base Camp.

Those at Base Camp and across the globe were shocked and saddened at the death of leading Swiss alpinist Ueli Steck last week. Steck died on April 30 after he fell nearly 1,000 meters during a solo acclimatisation outing on Nuptse.

Steck’s death was followed this week by another prominent loss: 85 year-old Nepalese climber Min Bahadur Sherchan died in Everest Base Camp on Saturday, May 6, from unknown causes (there is speculation that it may have been a heart attack, however). Nearly every Everest season brings with it attempts by young and old to set new records, and Sherchan was this year’s suitor of the age record. He previously held the distinction of having been the oldest person to summit Everest when he climbed the mountain in 2008 at the age of 76, but was dethroned by Yuichiro Miura of Japan in 2013, who summited at 80 years old.

Even before the tragic deaths, 2017 had already seen one of the more bizarre and outlandish events in Everest history when DJ Paul Oakenfold performed a concert at Everest Base Camp in support of his Soundtrek concert and recording series.

Responding to those who felt Oakenfold’s concert crossed some lines, Kenton Cool, Oakenfold’s expedition guide, released a statement on Facebook. Cool noted, “The Soundtrek project seems to have upset a lot of people. I can fully understand why many of you are appalled by the events at Basecamp so I have decided to explain the fuller vision behind the project.” He goes on to explain, “Soundtrek was never simply about throwing a party at base camp. The concept was for Paul to try and get a much deeper understanding of the importance of music and dance to the Nepali people, and especially the Sherpas and to use this to promote the country in his own unique way.”

In an email to The Outdoor Journal, Billi Bierling, veteran mountaineering journalist and assistant to Himalayan archivist Miss Elizabeth Hawley, summed up her thoughts on the Oakenfold concert.  “I am not sure whether Everest needed such a performance and when I first heard about it, it made me sad that the beauty and magic of Everest was exploited for such things,” she writes. “But then again, we do have parties at Base Camp, where we dance and have loud music—and the Sherpa usually enjoy it as well. […] As far as I am concerned I think Everest could have done without this gig but given what has been happening on the mountain over the past few years, I am not surprised and I wonder what will come next.”

And Bierling is right: Everest Base Camp has acquired a reputation over the years as somewhat of a circus and a concert is in keeping with that reputation. With hundreds of people from all over the world spread across dozens of encampments, Base Camp sprawls more than a mile in length. While a live-streamed concert by a famous musician has perhaps already put 2017 over the top as the most bizarre yet, it was already going to be a hectic season: 2017 is poised to be the busiest year in Everest’s history, with estimates of the number of climbers likely to grace the mountain’s flanks reaching as high as 1,100.

The 1,100-person estimate includes approximately 550 foreign climbers and 550 Sherpa. Among the many guiding outfits running expeditions this year are well-established operators such as Adventure Consultants, Mountain Madness, Madison Mountaineering, and Seven Summits Treks. Seven Summits Treks’ 2017 group alone consists of at least 79 individuals according to another veteran of the Everest scene, Alan Arnette.  In an effort to verify summit claims among the 1,000-plus climbers, Nepal also announced that this year it will be giving some climbers GPS devices.

The larger crowds on Everest this season continue an unsettling trend. Following the devastating 2014 avalanche that killed 16 Nepalese and prematurely ended the climbing season, the 2015 Everest season actually attracted more climbers than the previous year.

In a 2015 article published in National Geographic, journalist Mark Jenkins observed, “Despite calls to reduce the number of teams and climbers on Everest, Nepal’s Department of Tourism recently stated that more than 350 permits have been issued for the south side of Everest [in 2015]—more than were issued last year [2014] before the avalanche shut down the season.” The 2015 season was also marred by tragedy, when a 7.8 magnitude earthquake that hit Nepal resulted in the deaths of 19 climbers.

In her email to The Outdoor Journal, Bierling wrote, “Everest has become a very commercial mountain and we cannot go back. I always compare it with big mountains in Europe, such as Mont Blanc or the Matterhorn. The crowds there are horrendous and nobody really worries about that (or not that I know of) in the media. A lot of livelihoods depend on Mount Everest—whether it’s the lodges, the porters, the yak herders, the cooks or of course the climbing Sherpa.”

She believes that one possible solution could be to require guiding companies and outfits to require their clients to have prior experience on 8,000 meter peaks. “But this notion has been discussed many times,” she concedes, “and I have not seen anybody sticking to this unwritten rule.”

In his own email to The Outdoor Journal, leading American alpinist Conrad Anker identified what he sees as other potential steps that can be taken to deal with the increasing crowds and safety on Everest. Anker wrote, “Identifying a carrying capacity for the mountain, as is done on Denali, would be a good first step” toward addressing the hordes of (often inexperienced) climbers. Anker also said one key to improving Everest for all involved is making sure the Sherpa who work there receive the best training available. He and his wife Jenni have been working with the Khumbu Climbing Center for 15 years, with the goal of making the work “safer for the Nepali people that work on the bigs peaks in capacity of guides and porters.”

The weather conditions on the mountain have also proven more capricious and harsh than in past seasons. In an interview with Alan Arnette, Everest guide Russel Brice said, “The route through the Icefall is very active. We have already had more than 6 collapses that have closed the route.”  Winds have been high on both sides of the mountain. From Camp 3 on the Lhotse Face, Jim Davidson communicated to Arnette, “Brutal. 20 to 40 Mph gusts higher.”

The combination of the extreme crowds and over-the-top hoopla like Oakenfold’s concert simply represent the continued commodification of Everest. More climbers and an ever-more circus-like atmosphere, combined with the dangerous conditions observed so far this season, are a recipe for further preventable accidents and deaths. While requisite experience for would-be Everest climbers and a carrying capacity for the mountain would be positive changes, ultimately Everest is an industry and lasting change will only come from solutions that affect the economics.

As Bierling notes, the industry provides valuable income to the Sherpa community. But more fundamental to the industry’s unchecked growth is the revenue it generates for the Nepalese government, which reaps 11,000 USD for every climber on the mountain. Nepal’s GDP in 2013 was a mere 19.29 billion USD, which equates to 694.10 USD GDP per capita for the roughly 28 million inhabitants. In an impoverished country like Nepal, the revenue generated from Everest permits has real power.

Precisely how the industry can be reformed in such a way as to preserve the economic benefits for the Nepalese people and government, while also improving safety and environmental standards is an outstanding question, but an urgent one for sure. Yet as Bierling says, neither the mountain nor the business is going anywhere anytime soon; the climbing community will simply have to continue working to come up with better solutions to the extant problems. “There are some people who say that we should shut down Everest for a few years and give it a break,” she observed. “But I am not sure that would help much. Or if I may [quote] Miss Elizabeth [Hawley]: ‘Everest is just a big lump of rock—why would it need a break?’”

How the rest of this Everest season will play out in the wake of the early tragedies, the record crowds and tough conditions remains to be seen. Check back at The Outdoor Journal for further developments and news from the season on the world’s highest, most iconic peak.

Feature Image: Mount Everest’s North Face as seen from the path to the Base Camp, Tibet. Photo:  Luca Galuzzi – www.galuzzi.it.