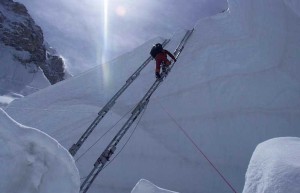 Everest Climbing Season 2015: Is it safer for Sherpas?

Nepal applies safety measures for climbers on Everest this season that includes a possible change in route.

But ambiguity remains on evacuation of Sherpas in case of an accident.

Nearly a year after an avalanche killed 16 Sherpa guides near Everest Base Camp, Nepal’s tourism ministry has applied measures to ensure ‘safety’ for Everest expeditions this season, which include changing the route on Khumbu Icefall region. However, there is no clarity yet on a formal rescue plan for Sherpas in case disaster strikes.

Everest climbing season starts from end of March and goes on till May.

“Just like last year, we have set up a contact office at the Base Camp (5,364 m) for the season. This time, representatives from the ministry of Tourism, Communication and Home Affairs will be placed on site to provide quick emergency responses and resolve any kind of problems,” Pushpa Raj Kotwal, head of the mountaineering division of the Ministry of Tourism told The Outdoor Journal over telephone.

“We are working with meteorological officials in Nepal to provide weather forecast and are also planning to introduce GPS tracking system for climbers,” he added.

The South Col is a popular route used by climbers, and passes through the Khumbu Icefall, known to be the most dangerous stage of climbing Everest. Large crevasses open suddenly, thanks to the constantly moving Khumbu Glacier, and towering seracs collapse sans warning.

The route that has been used for the last two decades passes closer to the West Shoulder, and comes directly in the line of avalanche. Sagarmatha Pollution Control Committee (SPCC), an NGO that works to promote cleanliness on Everest is authorised by the ministry of tourism to set the route on Everest. Icefall doctors, a group of Sherpas that set the route on the region will consider to change it by about 40 metres to the right, moving it closer to the middle of the icefall.

“The icefall doctors will leave by next week and try to set the route by mid-March,” said Yangji Doma Sherpa, public relations officer of SPCC. “The new route will go through the middle of the icefall. It will be less prone to avalanche but will lengthen the climb time by about two hours,” she said.

Dawa Steven Sherpa, an Everest climber and managing director of Asian Trekking, an expedition company based in Kathmandu said of the new route, “Going through the middle of the icefall helps you get away from the avalanche, but whether it is less dangerous or not is not something we can say sitting here in Kathmandu.”

“The route becomes longer, the crevasses are larger. Nine to ten step ladders would be required to cover one stretch,” he added.

“The route has been used before, sure. Back in the 60s, expeditions used different approaches to the Khumbu Icefall. It was only a decade ago that the need to formalise the route arose, and icefall doctors were assigned to the task,” he continued.

After last year’s disaster, the Sherpas boycotted all expeditions criticizing the government for providing little safety and medical benefits in the high risk climb through the avalanche-prone region. As a result, over 300 climbers had to abandon their expeditions in 2014.

In response to this, the government hiked the insurance cover for the Sherpas by 50%, and promised the climbers an extension of their permits.

According to Dawa, “The government does not have a formal rescue team in place. The Nepalese and western agencies take care of that. Helicopter companies such as Mountain Helicopter, Simrite Air and Fishtail Air work closely with expedition companies and are much more flexible and responsive if and when disaster strikes.”

“They have a trained staff that can perform high altitude and long line rescues,” he added.

The average cost per rescue on Everest is 7500-9000 USD, an official of Fishtail Air, a Kathmandu-based helicopter charter company that conducts rescue on Everest explained.  “For a rescue operation for Sherpas, the costs are covered by their insurance, and the expedition companies that they work for,” he said.

Dr. Nima Namgyal Sherpa, an expedition doctor who runs Himalayan Medics told The Outdoor Journal, “There are far more important measures that the government needs to take. There is no rescue team, no emergency rescue response team at Base Camp. In all emergency cases since 2012, it is always us that have been around and responsible for rescue. This needs to change.”

“There should be more doctors, this is sad,” he said. “There is no guarantee nor security for the people, and most of the livelihood of the country depends on this industry.”

Of the 16 Sherpas that died last year in the avalanche, only 13 bodies were recovered, while three remain buried in crevasses of Khumbu Icefall.

Eight of the 14 eight-thousanders are located in Nepal, and according to a study by World Travel and Tourism Council, the direct contribution of travel and tourism to GDP in Nepal was forecast to rise to 13% in 2014.

Feature Image: Olaf Rieck,
Caption: The last cleft in the Khumbu Icefall before the Western Cwm in April 2005.