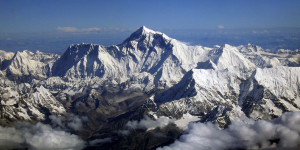 The Himalayan Club's annual seminar, this month in Bombay, will debate mountaineering on the world's highest peak, and whether it has changed from exploratory climbing to an easy-to-plan commercial trip.

The biggest avalanche on the world’s tallest mountain Everest in April 2014 killed 16 sherpa guides who were laying out routes for guided climbing teams. The incident shocked the world and re-sparked the debate on whether high-altitude alpinism has become a tourism show on the world’s most sought-after 8000er.

Looking for a discussion on this issue, The Himalayan Club is holding its annual seminar titled ‘Everest? Perspectives and Philosophies in Mountaineering’ on February 14-15 at the Mysore Association Auditorium in Matunga, Mumbai, an official release said.

Opening the seminar on Saturday, February 14, Lindsay Griffin, one of the world’s finest alpinists and President of the UK Alpine Club will deliver a lecture – ‘Escape from Mongolia’.

Among the other well known speakers we have Divyesh Muni, well known for his exploratory climbs of technically difficult mountains; Dawa Steven Sherpa who has scaled Everest twice; Harish Kapadia the world famous Himalayan explorer; Umesh Zirpe; an organiser and leader of three successful expeditions to 8000m peaks including Everest; Dr. Murad Lala, a cancer surgeon who completed the ‘Triple Crown Expedition’ in October 2012 when he summited three peaks above 6000m around Everest; Victor Saunders, a world-renowned British mountaineer who’s summited Everest six times, and Tony Smythe, son of the legendary Frank Smythe.

Nandini Purandare of The Himalayan Club said,”I would like to add that the HC is not taking any position; there is no intention to undermine either the desire to climb or the success of standing atop Everest and her sisters. These are both extremely commendable. The intention is to understand the healthy mix of perspectives and philosophies towards mountaineering.