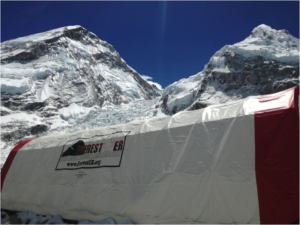 Everest ER: Medicine at the Top of the World

With all the stories about people getting injured, and even dying while climbing Everest, it’s not often you hear about the brave souls who protect and care for the climbers.

Here is their story.

On a chilly evening at 5400 m, as Dawa (Suvash), Subs (Subarna) and Brent (Brenton) are pouring “Su Chiya” (Salty Sherpa Tea) into the cups, the radio suddenly crackles. A Sherpa mountain guide, they had gotten well acquainted with earlier in the season, speaks on the radio, “Everest ER, do you copy?”

Dawa picks up the radio, and responds. There is news of two Sherpas (technically, high altitude workers) who are sick at camp 2 on Everest. As they try and connect with these sick Sherpas via radio, the connection is lost. The team springs into action. Abandoning their still full teacups on the table, all three head out with radios in hand, trying to grab the frail signal moving around the camp.

After ten minutes of trying, they seek help from the base camp crew of an expedition that has a base radio and a medical kit in their tent, at Camp 2. The sick Sherpas are taken into that tent, and via their friend, they receive medical instructions. After confirming that the appropriate medicine has been dispensed, the doctors can finally call it a day, radios purring besides their sleeping bags in their homely tents. It might not have been pulling someone from the jaws of death, but the three doctors are happy. This is why they came to the mountains, to address problems like these. This incident is an example of many the volunteer doctors of Everest ER deal with on an almost daily basis.

The Everest ER is a seasonal aid post, run every year during the spring climbing season by the Himalayan Rescue Association (HRA) in a tent at 5400m, in the heart of the Everest Base Camp. The HRA is a nonprofit, non-governmental organisation that was established in 1973 and runs two other aid posts targeting trekkers, one at Pheriche in the Khumbu valley and another at Manang in the Annapurna Circuit.

The Everest ER was set up by Dr. Luane Freer in 2003 recognizing the lack of proper medical services for the 1500 or so temporary residents of the Base Camp Tent City. This year marked the 16th consecutive season that the ER has functioned, including the 2014 and 2015 tragedies where it was a major contributor in emergency response and relief efforts. As for the Nepali volunteers, having a Diploma in Mountain Medicine is highly preferable. This year marked a few firsts for Everest ER. In its 16 seasons, this was the first season with an all male team of doctors. This year’s team featured Dr. Brenton Systermans, an Emergency Doctor from Geelong, Australia who also works as faculty teaching expedition medicine and polar medicine courses, Dr. Subarna “Subs” Adhikari, an Orthopaedic Surgeon currently working in Pokhara (Nepal) and Dr. Suvash “Dawa” Dawadi, a General Practioner from Kathmandu.

This was also the first season when there were two Nepali doctors (both with the Nepalese Diploma in Mountain Medicine and prior altitude medicine experience of some variety). Besides the doctors, there is a fourth wheel to the Everest ER, the ever present Mr. Lakpa Norbu Sherpa, in his 16th season with the ER, who is one of the few long-line rescue trained personnel in Nepal. The ER functions through the spring climbing season which usually lasts for 2 months from April to May. Being the only medical facility north of Pheriche (a 4-5 hour walk from Base Camp), the Everest ER is your friend in need.

From a nagging cough to dangerous pneumonia, from a bothersome diarrhea to life threatening altitude sickness, not to forget the limb threatening frostbite to life threatening trauma and falls; this is usually your first stop for treatment. Despite being housed in a temporary structure on a glacier that is continuously shifting shape, Everest ER is relatively well stocked in terms of medications and equipment.

The medications get restocked by helicopter ferries, and the equipment ranges from pulse oximeter to a portable ultrasound machine (donated for a season this year by the manufacturing company). The climbers paying for consultations and medicines are also contributing in their own way, as this allows the clinic to subsidize care for the Sherpas and support staffs whereby they get cheaper treatment than at a hospital in Kathmandu, the capital city.

This “Robin Hood” model is to encourage better health-care, seeking practices among the support staff so that they do not hide illnesses and medical conditions for the fear to having to spend too much, or worse still for the fear of having to end their expedition, losing most often the only chance of an income for the year. The clinic managed 19 cases of frostbite and sanctioned 42 helicopter evacuations from Base Camp to Kathmandu, out of which, 14 cases were evacuations from Camp 2. One particular example, where the right sequence of actions by a series of different people saved a life, was that of a Sherpa who was hit by an object (according to a climber who first got to the injured man, an oxygen bottle) on his head that cracked him open.

A random climber passing by provided him primary care, and radioed in on the HRA frequency about the injury. Captain Maurizio Follini (with Kaliash Helicopter Services) and rescue-trained Lakpa of Everest ER took immediate action, rescuing the stricken Sherpa from Camp 2 within 30 minutes of first radio, without worrying about who will pay for the rescue (his insurance status was unknown). As he was brought down to the Base Camp still bleeding from a gash on his skull, his ears and nose, it was clear he would need to go to Kathmandu for a scan.

The ER team once again, were lending their hand, controlling bleeding inside the helicopter, as Captain Maurizio just rested the helicopter for a while. Seeing his condition, Dawa decided to accompany him to Lukla. With the weather closing in they barely made it.

The Sherpa got transferred to Kathmandu the next day, and was discharged from a hospital there in 2 days, a life saved. Besides the obvious medical care, the ER team also get involved in training basic medical care, frostbite, skin care and trauma management exercise for mountain guides and high altitude workers at Base Camp.

It is satisfying to be able to share mountain-relevant life-saving knowledge and skills, with people who spend an enormous amount of their time up there. There is a potential to continue this trend and broaden the scope of this education and training program to the climbing Sherpas and supporting staff. For all these moments filled with positivity and optimism, there are also a few moments to the contrary.

The death of an “unsupported” Russian climber, just a hundred meters out of camp 3, where he was left for dead through the night in freezing subzero temperatures above 7000m was heart wrenching. Even more difficult, was hearing updates over the radio from several people passing this person, realising he needed help, but no one taking responsibility.

At moments like this, one feels the helplessness of not being able to fly up, and pull him into a tent, or better still get him off the mountain, maybe he could be saved. In a resource-limited setting, one must make do of whatever little one has. On the other hand, where there are no alternative medical facilities, everything the wilderness doctor does in their capacity, is significant for the patient. Simple interventions can make the difference between giving up an expedition and carrying on, and this is a huge difference. A climber who has spent years in planning and preparing for an expedition has his dreams, aspirations and devotions centered upon his success.

They deserve a chance at success; and treating their upper respiratory tract infection to enable them to reach the summit and to come back to you with a smile can be just as gratifying as getting a person to walk after a hip replacement.

A Sherpa achu (big brother in Sherpa dialect) who relies on his blessed genetic make-up, enormous strength and nonchalant endurance for his entire year’s income, in one climbing season would hold your hands and thank you for curing a sore on his back with simple analgesics and manipulations.

This feeling is priceless and is akin to the divine happiness everyone seeks. It can be a daunting task to keep up the legacy of a clinic that was set up with pure intentions of welfare of the climbers but more importantly, the Sherpas and supporting staff. One spends their entire free time with their ears fixated on the radios, following almost every way of the mighty climbers up the mountains, rejoicing in their success and saddened by their failures.

Observing and living the life of some of the hardest-working and craziest people in the planet is an important, if not the most interesting, aspect of Everest ER. Getting to hear about the legends of mountaineering from people who have closely worked with them is another perk. It is sometimes spiced with the lifetime opportunities of meeting the legends themselves.

The least one can take home from spending a month in the Everest region, is unquestioned awe and admiration, for the wonderful people of the Khumbu and those all over the world who they help to climb the mountains, and those who make it their dream to climb them. This is just a tiny bit from my experience of spending two amazing months at the Everest ER, as a volunteer doctor. Life has never been so rewarding. As Everest ER survives on donations and contributions, I plead upon the reader to take some time to visit www.everester.org to help this amazing cause.

Having said that, if you happen to be at the Everest Base Camp (South) in April or May, do make that 30-minute hike from Trekker’s Rock (the turning point for trekkers headed to Base Camp) to the Everest ER (HRA) tent and see for yourself.

Dr. Suvash “Dawa” Dawadi is a General Practice and Emergency Medicine doctor from Nepal, currently working at CIWEC hospital. He has also earned his diploma in mountain medicine, making him an expert in high altitude medicine and mountain rescue, and is an active member of the Mountain Medicine Society of Nepal (MMSN).