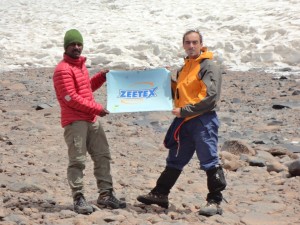 In an exclusive interview after retrieving   Malli Mastan Babu’s body from the Andes his friend and coordinator of the mission told The Outdoor Journal that the Indian mountaineer had summited Cerro Tres Cruces (6749m).

On heels of the Chilean mountaineer detecting and retrieving Babu’s body from the icy terrain of Cerro Tres Cruces, The Outdoor Journal interviewed Hernán Augusto Parajón who coordinated and executed the mission with the help of the Indian mission in Chile and Argentina and the and local governments. The interview is based on his answers received on Friday, 17th April.

TOJ: Who were the parties involved in the recovery of Babu’s body?
Hernan: The expedition was led by Mariano Galvan, who was the one who found him (Malli Mastan Babu’s body). In addition, there was Marcelo Soria and Lisa Sable, also climbers. But all of us where involved in the logistics, helping with communications and so forth. There were two 4×4 vehicles, a truck from the “Gendarmeria” (local, Argentine, police) and several other vehicles. It took three days to bring

down the body because of very snowy conditions.

TOJ: How big was the team of mountaineers that went to recover Babu’s body? Name them?
Hernan: The team that entered into the area where Mastan’s body was had five people (the leaders were the three mentioned above). And four more people were supporting the operation using vehicles. But in the area where the body was there were only five people, led by Mariano Galvan.

TOJ: When did the team start? What were the problems faced, if any?
Hernan: The rescue operation lasted three days in total. Climatic conditions had improved relative to the previous week. It was still very cloudy but the windy conditions were mostly very high up. Below, the climate was pretty good. The time that we had to wait before initiating the rescue operation was because of wind storms that are very dangerous. So we had to wait, no choice. But the snowy conditions were still there; that had not changed relative to when the body was located.

TOJ: When was the body brought down to base camp?
Hernan: The body arrived at base camp on Monday at noon.

TOJ: Where is it right now?
Hernan: The body is now in the city of Tucumán. Mastan’s sister is there. The body will be transported tomorrow (meaning Thursday ;that is, yesterday) to Buenos Aires to be transported to India. The body has already been embalmed. This is an official requirement for a body to travel, you cannot transport a body that has not been embalmed. So that has already been done.

TOJ: Has an official report been filed yet? If so, what does it say?
Hernan: I was the coordinator of the whole operation. The Mendoza authorities (Argentinean police) do their own internal report. Personally, I have not yet been asked for any report. I coordinated this operation for the Indian embassy.

TOJ: Do we know the cause of Babu’s death yet?
Hernan: He died from hypothermia. The body goes into cardiac and respiratory arrest due to hypothermia.

TOJ: We read somewhere that Babu managed to summit the peak. Is this true? Do you have more details about this?
Hernan: Yes, definitely, Mastan had reached the peak, no doubt about that. He reached the peak at 4 pm, a little bit late. And when he began to descend, he was caught up in the storm. He managed to reach the tent but probably he was already extremely weak. In fact, he died inside the sleeping bag. The peak was at 6749 meters and the tent was at 5950. So he descended around 800 meters. So the big problem was that storm that he encountered while descending those 800 meters or so. Unfortunately, he had reached the peaked a little bit late and descended right down into the storm.

TOJ: When is his body expected to be to flown to Chennai, India?
Hernan: As I said, the body will be flown to Buenos Aires tomorrow (by Thursday). The paperwork for a body to travel takes normally one full week. It is not an easy bureaucratic process as you can imagine but we will TRY to accelerate the process as much as we can.