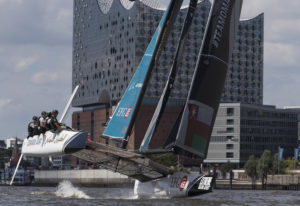 Act 4 of the groundbreaking Extreme Sailing Series continues today in Hamburg, where the fleet races in one of Europe’s busiest ports on the River Elbe.

Now in its tenth season, the award-winning annual global series raced in Extreme 40 catamarans has given the sport of sailing a healthy dusting-off. Bringing the action to the public with Stadium Sailing, putting guests at the heart of the battle and dramatically increasing the pace on the water, the creators of the Extreme Sailing Series have set new standards, both in terms of high level competition and sporting entertainment.

After three action-packed Acts in Oman, China and Wales, the 2016 Extreme Sailing Series season is just over the halfway mark.

With around 10,000 vessels paying a visit to the Port of Hamburg each year, the fleet of seven hydro-foiling GC32s is ravcing in one of Europe’s busiest ports, from the 28 – 31 July, on the waters of the River Elbe for the second time in the Series’ history.

To accommodate the introduction of the new fleet of boats the race area has been expanded slightly, allowing more room for manoeuvre in the super-fast GC32s. But, with the harbor walls enclosing the course, racing will still be at close quarters.

“The GC32s performed well in the close confines of Cardiff stadium setting last month, but the crews will face the additional challenge of strong tidal currents in Hamburg. I am expecting very close racing, with the mixed conditions throwing up some surprise results,” said Race Director, Phil Lawrence.

One team that knows better than most the impact that the shifty conditions on the River Elbe can have is SAP Extreme Sailing Team. Caught out by a gust midway through a gybe last year, the Danes took the plunge with a dramatic capsize, on a day which saw thunderstorms and winds of up to 30 knots (56 km/h).

“Despite the drama of a capsize and a huge collision we still finished on the podium and there were lots of things about our performance that we will try to repeat this time. We are getting more experienced in the GC32 and look forward to some close racing,” commented co-skipper Rasmus Køstner.

“In Cardiff we proved we could put four days of good performances together and we are getting more and more of the small details right. We will keep pushing and keep improving,” continued Køstner, whose team pocketed their first podium finish in Cardiff last month, and currently sit in fourth on the leaderboard.

As the fleet enters the fourth Act of the eight-Act 2016 season, the teams have found their feet in the GC32s. However two teams dominate the leaderboard.

Due to an injury putting him out of action, Hagara did not compete in the 2015 Hamburg Act, making this his Series debut at the venue, but the Austrian skipper already has plans to dominate the weekend.

“We plan to sail on the limit, constantly progressing and not making any mistakes. Oman Air may be the season favourites but we, along with the rest of the fleet, will put up a fight,” said Hagara, whose team currently sits only three points behind Oman Air.

“Hamburg is one of the most beautiful cities in Europe but at the same time, for a sailor, it is a very challenging venue. The course itself is very narrow, particularly for the use of high-speed foiling boats, and the shifting wind conditions, caused by the tall buildings along the shore, add to the challenge,” added Hagara.

With this being the second time Hamburg has hosted the Series, the tricky venue is still relatively new to all of the teams, which levels the playing field between stalwarts and newcomers.

“A new or less well-known venue makes it difficult to prepare, to set your strategy and to execute it. You need to put an effort into understanding the racecourse during racing. A good coach, and a set-up where new information can quickly be adapted into the race strategy, really helps,” commented Køstner.

Fans around the globe can watch the racing live online at the following times with expert commentary from Niall Myant and double Olympic gold medallist Sarah Ayton.