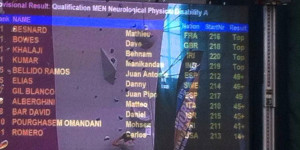 Manikandan Kumar, paraclimbing world champion-2012 is aiming to repeat his record as he qualifies to the final stage at Paraclimbing World Championship 2014 in Gijon, Spain.

Bangalore-based Manikandan Kumar, India’s only paraclimbing world champion is through to the final round at the International Federation of Sport Climbing (IFSC) Paraclimbing World Championship 2014. The international competition, held once every two years, witnessed Mani grabbing the top spot in 2012 in Bercy Village, Paris, France.

At the semi-finals held in Gijon, Spain this year, there were two qualifying routes in Mani’s category (MEN Neurological Physical Disability A). He topped both routes, along with France’s Mathieu Besnard and Iran’s Behnam Khalaji. Mani is due to face the final round on Saturday, September 13.

Commenting on his feat, Mani told The Outdoor Journal from Spain, “This i

s my second consecutive world championship reaching to the finals and I’m quite confident of winning a medal.”

The finals for the Paraclimbing World Championship will take place on Saturday, September 13 between 17h00 and 21h00 (GMT +2) and can be viewed via live streaming here