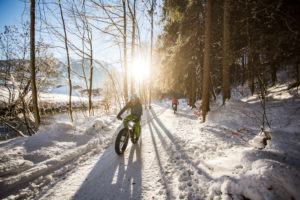 A competitive festival dedicated to riding fat bikes and playing in the snow? We’re in! The first ever UCI race on snow starts this weekend.

Commonly known as a wintery celebrity hang-out, regularly hosting and being praised by the likes of Madonna, Roger Moore and Kofi Annan, this high-scale ski resort in Switzerland looks to be changing up their image with the 2017 Snow Bike Festival. After an excited response from participants after last year’s event, the Snow Bike Festival announced a long-term partnership with GSTAAD to host in the postcard worthy region until at least 2019. This year’s accreditation by the Union Cycliste Internationale (UCI) will also make it the very first UCI race taking place on snow.

From January 19th to 22nd, bike enthusiasts, both pros and amateurs, from all over the world will gather to test their skills on the white stuff, with their choice of bike; Mountain Bike, Plus Bike or Fat Bike.

Yes, you read correctly. First making their appearance in the US around 30 years ago, these seemingly strange looking bikes with wide tyres, anywhere from 3.8-4.5 inches, have only began gaining traction in the rest of the world over the past couple of years. On top of the novelty, those tyres get you over snow, sand and any other rough terrain past the capabilities of a mountain bike. GSTAAD was one of the first European regions to jump at the chance to make this quickly growing sport available – or even recognizable, to both its residents and visitors.

The event will feature a 4-day Stage Race, varying in length and difficulty with stunning scenery, and an action packed Eliminator Night Race under floodlights.

Head to their website for more information on this weekend’s festivities.