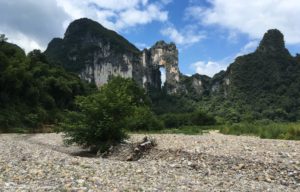 China is home to some of the world’s most spectacular natural arches, providing rock climbers adventures aplenty.

The first time that Eben Farnworth rode the new high-speed train between Guilin and Yangshuo in China’s Guangxi Autonomous Region, he sat in the window seat staring out at the undulating karst landscape as it whizzed by. Halfway between two stations, he saw a massive limestone arch. In the brief moment it remained in view, Farnworth was already formulating plans to go climb it.

Just a few weeks ago, over six months after he first saw it, Farnworth—who has called China home for going on eight years—together with friends Geordie Yip and Guangguang ‘Da Wei’ Wei, became the first people to stand atop it. Da Wei is one of the strongest Chinese climbers on the scene today, having sent 5.14c in China and abroad, and Geordie, who hails from the UK, is a prolific route developer across climbing disciplines. Known to locals as Chuanshan (roughly translated as “Through” Mountain), the arch they climbed stands approximately 150 meters high.

China is home to a number of iconic natural arches. In Yangshuo there is Moon Hill, first climbed by Todd Skinner in the early 1990s, and Getu has an arch that dwarfs even Guanxi’s Chuanshan. With one of the hardest multipitch routes in the country—Corazón de Ensueño, a Dani Andrada route most recently climbed by Alex Honnold and Felipe Camargo—Getu’s Great Arch is some 200 meters high.

Eben, Geordie and Dawei spent three days aiding to the top of Chuanshan, equipping a fully bolted route along the way.  Geordie, in particular, had some exciting moments. “When he was bolting,” Eben says, “he was just using hooks, and he took quite a few falls, particularly on the last pitch. Huge falls down the mountain.”

The line they chose, Eben says, “goes from the inside of the left-hand side of the arch, through the roof—about ten meters or so horizontally—and then up over the top and onto the main headwall.” The route has all the features that have made the limestone in nearby Yangshuo a favorite of traveling climbers. “Lots of tufas and lots of wind formed pockets,” Eben says. The summit is mostly free of vegetation, so views abound in all directions.

While they have been to the top and checked out each pitch, they have not yet freed the entire route. “The first pitch we freed at 5.10d, and the second pitch is 5.13b,” Eben says. “Then there’s a 5.13a. Then a pitch that will probably be 5.13b or 5.13c, then one pitch of about 5.11d, and finally another pitch of 5.10d.” Though intimidating grades, Eben, Dawei and Geordie are all more than up to the task of sending. Eben just recently sent his first 5.14c when he redpointed Spicy Noodle, a Chris Sharma line in Yangshuo. Once completed, their new route will stand along with Corazón de Ensueño as one of China’s hardest multipitch sport climbs. The group bolted a handful of other climbs during their time at Chuanshan, and say there is the potential for much more. Climbing development in the vicinity is still in the “very early stages,” Eben says, and there is little in the way of tourism infrastructure: “There’s only one little restaurant open in the evenings, and accommodations mainly consist of staying in spare rooms of people’s houses.”

But Eben and crew have high hopes for the area. “It’s not a place I’d recommend someone to go right now,” he says, “but in a few years time it should be great.”

Feature image: Looking out at the rolling karst landscape of Guangxi China from on top of the mountain by Eben Farnworth