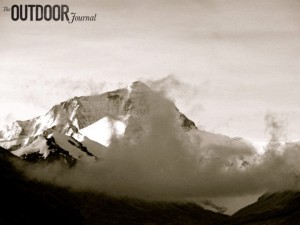 Most commercial Everest expeditions rely on elite Sherpa route-setters to fix ladders and ropes above base camp. Now, only six remain to do this dangerous job on the world’s highest mountain.

Mingmar Sherpa, 45, performed a crucial task on Everest. ‘Icefall doctors’ are responsible for setting up ladders across the shifting seracs and crevasses of the Khumbu Icefall, where climbers must cross a buckling, breaking glacier in order to continue up the mountain. But working to set up these routes on the 29,035 ft (8,850-mts) mountain cost Mingmar his life last Sunday, when the experienced mountaineer fell into a 45m deep crevasse.

This is the first incident where an ‘Icefall doctor’ has died on Everest. Only six of them remain this season to undertake one of the most dangerous jobs on Earth.

Mr Ang said the body had fallen very deep into the crevasse, and even experienced rescuers had difficulties, taking over a day to retrieve it.

The Sherpa’s body was airlifted to Dingboche, a village in the Khumbu region of Everest, where it was cremated later in the day.

His family, a wife and two children, will receive up to 6,00,000 Nepali Rupees (USD 6,877) as compensation from the insurance authorities.

Describing the role of the ‘Icefall Doctors’, Colonel Swaroop of the Indian Army’s mountaineering team said that it was unique as no other peak or glacial mountain posed the challenges akin to that en route to Everest.

“An icefall doctor has to dig through snow and ice, find stable rock and drill in deep bolts, to securely anchor carabiners and ropes. He also has to climb with regular mountaineering gear as well all this equipment, including ladders, and also monitor their placement constantly in extreme weather conditions”, said the Army officer, who summited the peak in 2001.

2013 marks the 60th year when New Zealand’s Edmund Hillary and the Sherpa Tenzing Norgay successfully climbed the world’s highest mountain. Since then, at least 3,000 people have reached the summit, while over 200 people have died in the attempt. Ten of these deaths occurred last season.

Many climbers have criticized the commercialisation of the mountain in the intervening years, with guided trips allowing inexperienced enthusiasts to attempt a climb beyond their natural ability, in an unforgiving environment. In comparison, only 280 climbers have ever summited K2 28,251 ft (8,610 mts), the world’s second-highest mountain, and 187 on Kanchenjunga 28,169 ft (8,585), the world’s third-highest.

1996 was the deadliest year on Everest, when 19 people died in events chronicled by Jon Krakauer in his best-selling book, “Into Thin Air”.