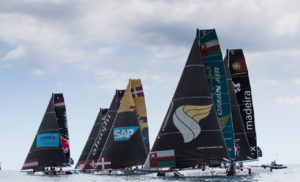 The new kids on the block are sure to attract plenty of attention with a Thalassa Magenta Racingcrew roster that includes some of the world’s most successful female sailors.

The new team will race with six crew members, as opposed to five on the all-male boats, and the Canadian-flagged catamaran will be skippered by New Zealand Olympian Sharon Ferris-Choat.

Thalassa Magenta Racing in partnership with the Magenta Project aims to give female sailors opportunities and pathways to compete at the highest performance levels of the sport. The team’s entry into the Lisbon Act is part of a long-term ambition to create an all-female crew capable of being competitive in the Extreme Sailing Series.

“It is the Formula One of sailing. With successful corporate exposure and VIP hosting, it offers high return to team partners and is very exciting sailing for the sailors. It’s a great balance and we are pleased to announce Marinepool as our sponsor for Lisbon. We aim to put a competitive team together for the 2017 Series and Lisbon is the start of the adventure,” she added.

The participation of Thalassa Magenta Racing at Lisbon follows a GC32 training week earlier in the year for the all-female crew that saw a huge progression in skill and technique for the team.

Ferris-Choat continued: “To be the first all-female crew in the Extreme Sailing Series is a proud moment for all the girls in our GC32 Squad. We have so many girls wanting to compete at an elite level of sailing – there is an absolute need to create this opportunity.”

The team is the second wildcard entry to be announced for the Lisbon Act, following the news that NORAUTO, skippered by Kiwi match-racing ace Adam Minoprio, will also make its Extreme Sailing Series debut at the penultimate Act of the year.

USA-flagged Vega Racing, skippered by American Brad Funk, has also confirmed its entry in the Lisbon Act, following its debut in Madeira, bringing the tally of world-class teams on the starting grid to nine.

For the rest of the fleet, Lisbon could be a make-or-break Act, with only two events left this season, and the leaderboard closer than ever.

A spectacular win for Alinghi less than a week ago in Madeira saw the Swiss team narrow the gap in the overall rankings to Oman Air to just three points, while second place for Red Bull Sailing Team has put them well within reach of their first ever Series win, currently two points behind Alinghi.

This is the first time the Series has visited Lisbon, Portugal’s capital city. Four days of racing are planned, including a longer coastal race combined with the Series’ signature Stadium Racing format.

“I am looking forward to Lisbon very much,” commented Race Director Phil Lawrence. “We’re in the estuary of the port, so it will be tidal, and we could see a wide range of wind conditions; it could be quite windy or quite light. It will be a very different challenge for the sailors and it’s coming up really fast!”

To find out more about the event visit the Extreme Sailing Series website.