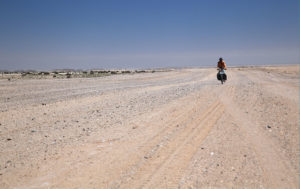 Following the Line: A Triathlon Across the Border between Europe and Asia

A triathlon spanning 9,000km, across the perceived border between Europe and Asia, will test Charlie Walker and Callie Morgigno’s endurance as they explore what it means to be European or Asian in a world divided by imaginary lines.

An Alaskan woman and British man are set to embark on a nine month long expedition that will follow the perceived border between Europe and Asia. The line accepted by current academic consensus is formed by two mountain ranges, two seas, and a river. The team will ski, paddle and cycle over 9,000km, from the arctic coast of Russia to the Bosphorus in Istanbul.

The team comprises of Charlie Walker, who went on a 4-year, 43,000 mile solo bicycle journey across 60 countries when he was 22 years old. And Callie Morgigno, who has worked in an Antarctic research base, donkey trekked across Mali and hiked through Afghanistan’s remote Wakhan corridor. The team first met in Tajikistan five years ago when they crossed paths on extensive cycle journeys. Since then they have discussed several expedition ideas, but this was the first one that ‘felt both challenging and important’ according to Walker, and will be their first expedition together.

The triathlon will test the endurance of these experienced adventurers. During the course of the journey, they will cross the length of the oldest mountain range in the world, paddle the Ural River from source to sea, and cycle 2,500-miles across the Caucasus range, the Black Sea coast, and finally end on the Bosporus. The expedition aims to understand the conceptual divide between Europe and Asia, between ‘us’ and ‘them’. Conducting interviews with people along the way, the team will answer the question: is there as much of a divide as we think?

The team seeks to raise £30,000 for Médicins Sans Frontières (Doctors Without Borders). Speaking to The Outdoor Journal about how they chose what charity to represent, Walker says, “I’ve always respected the work of Medicins Sans Frontieres and their tremendous courage in completely ignoring arbitrary, human-imposed borders for the purposes of their vital humanitarian work.”

Walker and Morgigno will set off on their journey tomorrow (14th February 2016), and are still looking for sponsors. Visit their expedition page here, where the team will be posting regular updates during the course of their trip.

Feature Image: Charlie Walker cycling across the Namib desert during an expedition. Photo by Hanz Zweigers