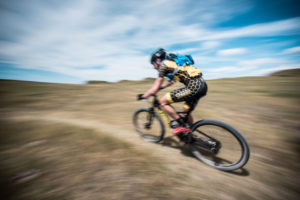 For Love of the Bike

A cycling group visits a cafe in Colorado every day and takes a young barista under their wing.

Now a professional cyclist, Kelly reflects on the moments that got him here.

I always wanted to fit in. One of my first memories as a child was being overly agreeable to try and please other kids just so I could be included in their friendship circle. I’m not exactly sure where it came from, but that character trait was present in me for a large part of my life far before I realized I love bikes.

I would say the most telling (and traumatic) moments of that trait for me were in junior high and high school when the dreaded call to sign up for sports arrived. ‘Sport’ was seemingly the most important measuring stick of worth in a small town like the one where I grew up. At least that’s how I felt as a young man.

Situated next to the Badlands of North Dakota, Dickinson was a football and wrestling town. My build and athletic ability (or lack thereof), didn’t allow me to even think about trying out for football – and I was definitely not cut out for wrestling. I did find a small group of like-minded allies who were into skateboarding, which became my de facto ‘sport’.

There I could find acceptance and freedom to try and be myself. I loved every aspect of skateboarding even though I knew I would never be good at it. However, the community aspect was really what kept me around that circle until I graduated from high school. Just two days after I walked across the stage in our school’s gymnasium to grab that coveted diploma, I packed my bags and left for Colorado.

Being naive has its benefits. When I rolled into Denver at the age of 18, I was wide eyed and ready to take everything in. I hadn’t run away from my home town as much as I had chosen to try a new adventure in life. In fact, I’ve always been very close with my family and it was a difficult decision to leave them in search of a new and unknown chapter in my life.

The first order of business was to get a job. It turns out that graduation money only goes so far when you have to get your first apartment in a big city. I look back on those days with bewilderment that I actually didn’t even think about a financial plan. I just sort of assumed it would work out. And it did.

Soon after getting into town, I got a job at a coffee shop where a tight-knit group of cyclists would meet up post-ride and hash out the gritty details of how much they had just suffered, all the while laughing about it. Some of them were bike shop employees, some were just serious cyclists, and some were Olympians. I quickly befriended them – or more accurately – they befriended me.

I was a completely unknown kid who was working as a barista and had no athletic ability, but they were treating me like a part of their group. I had expressed interest in learning how to mountain bike after I had seen my first full-suspension bike and I was quickly set up with the gear and the people to teach me how. It was love at first pedal stroke. That was 1998.

Just yesterday, I was mountain biking outside of Golden, CO and couldn’t help but feel a little nostalgic about the good ol’ days, shortly after I moved here, when I was on the same trail with a friend of mine. She was an Olympic cyclist from Australia and she took me under her wing. There was no ego, no pretension, no feeling of “I’m wasting this woman’s time.” She and I had great conversations which led to a solid friendship. What I remember most was how professional she was, but also how ‘in the moment’ she was.

That always stuck with me. She guided me along until I ultimately grew into a bike racer, sharing with me what hard work and discipline looked like and what the outcome would be.

If I take a 30,000-foot view of how I became a ‘professional’ cyclist, I’m completely blown away at how lucky I was to fall into such a great group of people. There was never a need to try and fit in. We all love bikes and shared a potent love for being outside on two wheels. Sure, some of us loved pushing ourselves harder than others, but that was something each of us respected about one another.

One person in particular, Josh, became one of my closest friends and teammates. Of all the hours we spend training together, our conversations rarely revolve around racing. We cover everything from family, kids, work, food, movies, beer and travel. Some of the most formative years of my life happened to be in the midst of my growing love of the bike, so most of my major life-changing events have specific rides and people attached to them. Those moments, those rides, are invaluable to me and I’m so grateful for them.

Ultimately, I realized that I race bikes so I can use it as an excuse to ride. I rarely record any data from my training rides and the most technologically advanced piece of gear I wear is a watch with a second hand (and yes, I deservedly get ridiculed by other athletes). This is not to say that I don’t work hard nor take my ‘second job’ seriously. I’ve always prided myself on being professional when I realized I had an opportunity to excel in a sport, but I was taught by my peers that winning and losing is fleeting.

My coach told me to realize the ‘now’, because soon enough it will be the ‘back then’. Bike racing will be done one day so I certainly make sure to enjoy it, but I also know the longevity of the sport lies in my love of being on a trail, high up in the mountains. No number plate needed there.

As with any relationship, sometimes it takes a while to find one another. I was into my 20s before I really started to understand how important cycling was to me and it became a sort of therapy. If I ever needed to get away, the trails were always going to be there. The mountains were always welcoming and the air was ever inviting. Cycling has given me a calmness that I believe I was longing for from a young age and I will forever be grateful to the people who went out of their way to take me in.