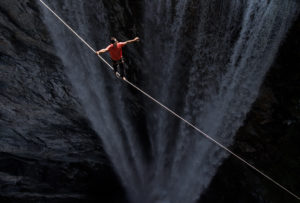 Watching video of Friedi Kühne walk a highline hundreds of meters above the ground, without any safety gear, is both terrifying and beautiful.

He might be out of his mind, but he’s also the best free solo highliner on the scene today, and just proved it once again.

2017 has been quite the year for free soloing. On September 19, just a few months after Alex Honnold completed the first free solo climb of El Capitan, German slackliner Friedi Kühne set a new record for the longest free solo highline ever recorded, walking a 110-meter long line suspended roughly 200 meters above the ground in the Verdon Gorge, in the South of France. To set the new benchmark, Kühne had to best the previous world record—a 72 meter highline over Hunlen Falls, in British Columbia, Canada—of which he was also the holder.

While walking a 100+ meter highline leashless has been on his mind for a while, Kühne says, “Free solo highlining is still something that is kind of spontaneous and in the moment for me. I don’t usually travel somewhere specially to do it, it’s just something that happens when the line is perfect and you’re in a good spot. The line we were at on in Verdon, the people I was with—it was just kind of perfect, it just kind of led up to the moment.”

That being said, he prepared meticulously in his own way. “I basically told myself if I could walk the line back and forth ten times without falling or losing control, that’s when I would be ready. So I did that over the several days before.”

Stepping onto the line without a leash, any trace of fear disappeared. “The mindset is like a trust fall,” he explains. “Except you play it with yourself: you’re the other person catching you. The better you know yourself, your own limits and your own skills, the more ready you are for free soloing.” In video of his prior world 72-meter free solo over Hunlen Falls, his calmness and mastery are on full display:

For the ten minutes or so that Kühne was on the line for his new 110-meter record, it was magic. He could see at least 700 meters of exposure to the valley on one side, with a sheer wall of rock out of the corner of his eye on the other. “It felt very good and I felt in control, but I had to give it more [than other free solos I’ve done in the past],” Kühne says.

That Kühne broke his own free solo record speaks to how few individuals there are pushing this most dangerous of games. “There are millions of other things you can do on a highline with a leash that are lots of fun,” he says. “But some people, like me, want to free solo; that’s why I do it: because I enjoy it. But I’m not encouraging anyone to do the same thing. You have to find out for yourself what’s right.”

And even though he enjoys free solo highlining, he knows that continuing to push the envelope is risky business. It’s not something he plans to do all the time: “100 meters is a very magical mark in slackening. With the free solo record, I honestly think this one will stand for quite a while. I’m not actively intending to push it anytime soon. I’m not saying I definitely won’t, but for now I feel quite satisfied and don’t think I’ll do a big solo again anytime soon.”

To follow all of Kühne’s highlining shenanigans, with a leash and without, check out and Friedi Kühne – Slackliner and @friedikuehne.

While we don’t advocate free soloing, we hope this inspires you to go on other safe and no less rad adventures, like this mountain biking trip at The Outdoor Voyage. Check it out!