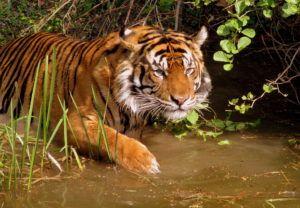 Global Tiger Day: Six Steps That Can Help Save The Tiger

On Global Tiger Day, conservationists and explorers explain how the adventure travel community can, by making the right choices help save the tiger.

The population of the tiger has been on the decline since the start of the 20th century. The majestic creature that once commanded a range across Asia –  from Turkey to Russia has lost 93% of its historic range in the last 100 years. Out of the original 13, it is now present in eight countries – India, Bhutan, Bangladesh, Nepal, Indonesia, Thailand, China and Russia.

The IUCN Red List has listed the tiger as an Endangered specie. Out of the nine sub-species, three are already extinct, and out of the six remaining, four are under even bigger threat. The census figures are controversial, and recent reports in Indian newspapers even claim that nearly 73 tigers died in 2016 alone.

Studies have blamed direct poaching, prey depletion and habitat degradation as the prime reasons for its decline.

While humans are directly responsible for the dwindling numbers of the largest cat species, and for the loss of several creatures of nature, there ARE some of us who wish to DO something to stop this decline.

The Outdoor Journal reached out to experts in the field – safari guides, conservationists and explorers and compiled a list of habits and activities you must adopt during your travels to help reduce the decline in the tiger population.

1. STAY INFORMED AND SPEAK OUT

Belinda Wright, Executive Director of Wildlife Protection Society of India says the first and foremost thing is to “stay informed about tiger conservation issues.” Only when you are armed with knowledge can you make the right choices. Find out about the consumption of tiger body parts including tiger bone in Chinese Tiger Medicine, about the use of tiger decor in homes, about the tiger farms in China, Laos, Vietnam and Thailand which are fuelling the demand for captivity of wild tigers and several related issues. And when you do, fuel yourself with enough passion, support the right groups and speak out about it.

“When people go on a tiger safari, they need to understand that the prime objective is to enjoy nature, the forest, the general wildlife. The objective is NOT to spot the tiger!” says Mandip Singh Soin, Director of Ibex Expeditions, and Founder-President of Ecotourism Society of India.

“When they become tiger-centric, especially in India, it puts a lot of unnecessary pressure on the safari guides and naturalists to spot the tiger. This isn’t right,” he says.

He goes on to add, “People should also travel to lesser known parks. They should get in touch with their explorer’s side, and visit places that are not often travelled to. This promotes wildlife protection in those areas. Because the locals will find employment, they won’t have to depend on poaching for their livelihood. They will understand the importance of protecting wildlife for tourism in the area.”

For Rhett A. Butler, founder and head of mongabay.com, a conservation news site, one needs to “Understand the impact of what you purchase when you travel.”

“Are the souvenirs you buy contributing to wildlife trafficking, labor abuses or deforestation? If you don’t know, tactfully ask a guide or local expert about the origins of the items you buy. And of course do your research beforehand to get a heads up on potential issues,” he told us in an email.

“Stop the abuse of tigers in captivity, for example captive adult tigers and cubs in Thailand that are used for “tiger selfies”,” Ms. Wright said when asked about responsible travel

“Avoid visiting any unethical captive tiger exhibits, such as Sriracha Tiger Zoo in Thailand,” she added.

Travellers can change the nature of tourism of a country by choosing the right operator.

Anna Tinker, a safari guide based in South Africa (and was recently charged by a lion) says “Choosing the ‘right’ tour operator for your once in a lifetime tiger safari isn’t easy. It’s important not to take a company’s claims at face value.  Research their ethical stance and reputation for yourself. These days, it’s getting harder and harder for companies to hide their shortfalls. If there’s something about them that doesn’t feel right, you should trust your instincts and try somewhere else instead.”

Julian Matthews, wildlife conservationist and chairman of TOFTigers, a nature tourism action charity based in New Delhi says for Indian safari lodges, “Demand the use of only PUG certified lodges when visiting wilderness areas.  Our independent professional audit team have spent 24 hours at each and every lodge and resort inspecting their operations, talking to their staff and walking their properties, to give us the very best idea just how good each provider is. Those who pass our minimum standards get our PUG certificate. That’s 75 lodges and resorts in 23 tiger reserves and areas of beauty to choose from. It’s the only way to know who is and who isn’t doing their bit for tigers and  their forests.”

Check out their  Good Wildlife Travel Guide to India and Nepal for further reference.

Ms. Tinker adds to this – “It’s great to see safari companies and tour operators stand up for sustainability. Many have now said ‘no’ to handing out those single use plastic water bottles and have opted for more environmentally friendly, reusable options. If your tour company hasn’t caught up yet, don’t be afraid to ask them why!”

4. THINK ABOUT YOUR DAILY CONSUMPTION CHOICES

Ms. Wright calls for the responsible citizen to be smart about disposal of waste and usage of water, and reducing carbon footprint, wherever possible.

According to Mr. Butler, it is over-consumption that kills the environment.

“Many people who are able to afford overseas adventure travel consume too much in their daily lives,” he says.

“Think about the impact of your consumption — whether at home or traveling — and take steps to reduce that, whether its taking shorter showers, eating less meat, or taking public transportation or riding your bike to work more often.”

For the safari guide, we must keep a watchful eye for palm oil.

“So I hadn’t heard of palm oil until a trip to Melbourne Zoo six years ago,” Ms. Tinker told The Outdoor Journal.

“They’d used their orangutan display to highlight the environmental consequences of palm oil plantations, and their message hit the mark! But now I know that it’s more than just orangutans being affected – huge tracts of former tiger habitat is being converted to palm oil plantations. I try my best to avoid palm oil, but it shows up in so many products we use every day like shampoo and margarine. I’ve learned that if you can’t avoid it, you can try to look for sustainably produced palm oil products that have the RSPO (Roundtable on Sustainable Palm Oil) or Green Palm certification labels.”

Supporting a decent non-profit by volunteering or contributing money can go a long way. Check out the ethics and philosophies of the organisations you are thinking of supporting and offer them your time and skills. Ms. Wright suggests signing a petition to take action against cruel wildlife tourist attractions promoted on TripAdvisor – wildlifenotentertainers.org

Mr. Matthews suggests, “If you just want to help we operate the Village Wildlife Guardian scheme, which has been instrumental in helping stop poaching and being a preventative agent for much of what is happening around parks. We have them in Ranthambhore and now in Kanha – but we want to have them everywhere, supporting parks with intelligence and village support. Charitable donations help us keep these guardians around the park boundaries monitoring wildlife – and human movements – in and out of the parks.”

“It’s a horribly over-used cliche, but one I abide by: “Take nothing but memories, leave nothing but footprints.” Too often when I travel, I see people littering or harassing wild animals. Pick up your garbage and leave the wildlife alone,” says Mr. Butler.

The ultimate set of outdoor ethics for promoting conservation, Leave No Trace, a non-profit set up in 1994, is built on seven principles

Being conscious of and minimizing our impact on the planet is an important conservation ethic, and one that we tend to forget.