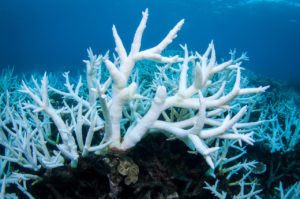 Is The Great Barrier Reef Going to Die?

Does this mark the end of the world’s largest living system? Scientists say things look grim, but there is still hope.

Dr. Rusty Brainard, Chief of the Coral Reef Ecosystem Program at NOAA Science Center, told The Outdoor Journal in an email, “The GBR (Great Barrier Reef) is currently experiencing another (now 4th) mass bleaching event. It is directly following the worst ever recorded (in terms of range, severity, and impact) bleaching and mortality event in 2016, which means that the corals of the GBR have not had the requisite time to recover from that event. Recall that many of the corals died in 2016 (I don’t have the numbers with me, but something like 50%). Many of the remaining corals that survived likely experienced severe thermal stress and most are probably still in a severely weakened state when the 2017 started.”

“Often, corals that survive mass bleaching are in a weakened state that leaves them much more susceptible to diseases, analogous to humans that are recovering from one severe illness often succumb in their weakened state to some other illness, say pneumonia… In either case, the current 2017 bleaching event remains in it’s early state, but I personally think that IF it persists for very long or IF it becomes severe, it will indeed be extremely bad news for coral survival in the GBR,” he said.

Marine biologist and photographer Brett Monroe Garner, who was at the GBR until last week, also had grim things to say, “The Great Barrier Reef is currently undergoing another widespread mass bleaching event right now—recently confirmed by GBRMPA and as seen in the photos I sent you. The article in Nature and its conclusions only refer, most recently, to the bleaching event of 2016. Its dire warnings are coupled with a prediction of another bleaching event occurring within the next decade, and yet here we are with the next round of mass bleaching starting only within the next 12 months. This is the first time we’ve recorded back to back bleaching events. The previous events were spread out over a number of years: 1998, 2010, and 2016. This isn’t good news for the reef.”

So does this mean that the reef is going to die?

“No, definitely not yet,” said Brett. “But it does mean that with the new, higher ocean temperatures we’re experiencing from climate change, the reef is going to change. If we don’t want our habitats to change, the first and most important thing we need to do it stop changing the climate. Unfortunately, local management and local efforts do not seem to be able to halt bleaching, but they will help the corals recover after the fact so they are still crucial for the future of the reef.”

“Yes, I absolutely think it is possible to save the GBR,” said Dr. Brainard.

“Corals and coral reefs are amazingly resilient and many corals will likely survive to some extent, though not anywhere near the healthy levels for which the GBR is famous. The most important thing human societies can and must do to prevent the loss of the corals and coral reefs of the GBR is to immediately get CO2 emissions under control. Every year of increasing global atmospheric CO2 increases the amount of heat trapped in the atmosphere and oceans and the amount of CO2 absorbed into the oceans (changing seawater chemistry known as ocean acidification). The sooner and faster we address CO2 emissions globally, the chances that corals and coral reefs can survive and recovery increases. We presently have numerous alternative energy technologies that could cost-effectively transform the global energy production and the associated economies to significantly reduce CO2 emissions and many countries around the globe are actively moving toward widespread implementation of these technologies toward a more sustainable planet,” said an optimistic Dr. Brainard over email.

“It’s amazing that 193 countries signed the Paris Agreement, which was really the first time we had the necessary political will to actually turn the corner toward sustainability. Disturbingly, the past few months have shown a dramatic reversal of these positive changes as U.S. policies have shifted away from sustainable alternatives in favour of inefficient CO2 emitting technologies. These recent shifts in U.S. energy policies appear to be influencing some other countries to also slow down their shift toward alternative energies. Hopefully, most of the countries of the world will continue and accelerate alternative energy pathways,” he continued.

“Aside from reducing CO2 emissions, effective implementation of ecosystem-based management (EBM), which includes sustainable land management, and ecosystem-based fisheries management (EBFM) of the fisheries sector at local to regional scales, could greatly increase the likelihood of survival of corals and coral reefs and provide additional time to get our CO2 emissions under control,” he explained further.

“It is very drastic and disheartening on the reef right now. While some sites do look fine, there are others with upwards of 90% bleaching. If the water temperatures drop soon it’s possible many corals will come out of the bleaching, but we’re already seeing many of the bleaching corals dying and being overgrown by algae,” Brett said in his email.