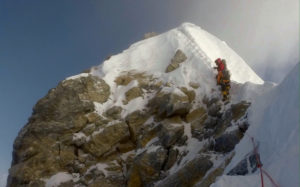 Has Everest’s famous Hillary Step Collapsed or Not?

The most prominent feature of Mt. Everest, named after Sir Edmund Hillary, has allegedly been destroyed.

After reaching the summit on May 16, British mountaineer Tim Mosedale claimed the “Step” has disappeared, adding yet another controversy surrounding the Everest circus. A vertical, 12m (39ft) rock face located at 8,790m, the step has always been regarded as the most technical part of the Everest climb (from the Nepal side)—the last obstacle before getting to the top. Mosedale wrote in a Facebook post, “It’s official – the Hillary Step is no more. Not sure what’s going to happen when the snow ridge doesn’t form because there are some huge blocks randomly perched hither and thither which will be quite tricky to negotiate”.

It has been suspected since 2016 by several climbers that the 2015 earthquake may have destroyed the Step. Climber David Liaño summited in May 2016 and noticed a drastic change between 2013 and 2016.

However, authorities in Nepal have denied this claim. Several senior officials have stated that this is a rumour. Veteran mountaineer and CEO of Asian Trekking, Dawa Steven Sherpa, told The Outdoor Journal, “Last year I mentioned this to the climbing community. We noticed changes to the Hillary step but there was a lot of snow cover so it wasn’t possible to confirm it”. His father, Ang Tshering Sherpa, President of the Nepal Mountaineering Association, told the BBC that “nothing has happened to the Hillary step, only a small portion of the rock is visible, the rest is under snow”. On the disputing claims, Dawa stated, “Something like this is big news, the officials are going to be very cautious with a claim of just one climber. They’re looking into it and gathering their own evidence to ensure the reporting is true. Right now, I have teams going up there, to the summit, reporting that some of the rocks have moved. From my side, I can say for certain that there are changes. I’m helping authorities gather information at this time”.

While Sir Edmund Hillary and Tenzing Norgay climbed the crack between the snow and rock on May 19, 1953, the ascent and descent are now generally made by fixed ropes, placed by teams going up. However, in recent years, the “Step” has now become a bottleneck with increasing numbers of people climbing the mountain. In fact, Tim Mosedale reported dangerous “traffic jams” on the mountain in early May. He came across a big group of inexperienced climbers, including one who had his crampons on the wrong feet. The Nepal government issued around 371 permits to foreigners this year, the most since 1953. Along with sherpas, the number goes up to 800. With only four or five days in the season with half decent weather conditions for a safe climb, 800 people on the mountain at the same time can make the situation deadly. Altitudes higher than 8000m are referred to as the “death zone”, where chances of frostbite, injury, and death are significantly high.

In regards to what this means, as of now it is difficult to say. Has the step really collapsed? Will it make the climb easier, tougher, or more dangerous? If it truly has diminished, future climbers may not have to climb the near vertical rock but they may have more limited paths up to the summit, causing more bottlenecks. Why are the officials disputing the claim? It could be a difference in definitions or it could be that the locals aren’t ready to accept the loss of such an iconic part of the mountain. Whatever it is, we will know for sure very soon, as more expeditions make their way up the peak to investigate.