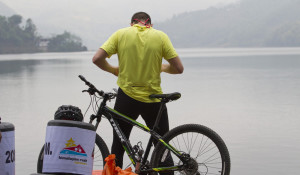 Himalayan Rush, a triathlon held in Pokhara, Nepal presents a tough route but does not pretend to be more serious than it is.

The atmosphere on Race Day was fun, vibrant and relaxed. Here’s a race report:

The fourth edition of the Himalayan Rush triathlon took place this year on the 28th of March. Following a few days of moody rain and cloud coverage, Race Day saw a sunny and bright sky. Founded as a passion project by Maneesh Shrestha, the race that once had only 30 participants saw over 100 people present this year. There were athletes of varying nationalities, ages and experience level present, the common factor being that everyone was there to have a good time.

The Outdoor Journal Honorary Advisor and athlete Mohit Oberoi repped us at the race, and here’s what he had to say:

Pokhara always provides a great backdrop to running and biking and I have been here twice before for the Annapurna 50k & 70k runs. I was keen to get back to this amazing town and country for the Himalayan Rush triathlon, but as my wife Annie put it, I didn’t seem rushed at all at the swim start!

Begnas Tal (17km from Pokhara) is a lovely lake that looks exactly like the lakes found in Kumaon (Sat Tal / Naukuchiatal). It’s a clean, rain fed lake that provided a backdrop to this event that is probably the only properly organised triathlon in Nepal.

I cycled to the starting point from Pokhara, to find the organisers all set and the course beautifully laid out. My event was the Standard / Olympic (1.5k swim, 40k bike, 10k run), give or take 5% of the distance as it’s hard to measure the exact course in the hills. I had been warned that the run and bike course would be hilly and rough, typical of races in Nepal.

The swim course was an out and back loop, 750 metres up and 750 metres down. The horn went off and we all jumped. I walked in as if this was a casual swim with my buddy “Big Mo” back at Bhatti lake during our mid-week swim. The easy swim was very slow for me by at least 5 – 6 minutes; I came out of the water in the last bunch in 43 minutes! (I did think it took much longer than expected!) This did look like a course for a personal best for the swim disappointed for sure.

I got to the bike transition point, dripping in water, pushed the bike out and started on a broken tarmac. The first hill came up, and the bike needed to be pushed up halfway, the steep downhill bit was a good shock to the mind. The course moved to the flattish tarmac out of the Begnas village to loop around the valley, moving to another lake called Rupa. Maneesh Shrestha caught up with me (he is the founder of this triathlon, and lives in Delhi now.) I stuck with him and we chatted about the course, which winds itself through villages. The kids and people were cheering and throwing petals as we passed through the small hamlets (this probably happens only in Nepal.) The loop takes us around to the base of a hill and then as Maneesh put it “the fun started”. We had come to the start of the uphill section of a 3.5k climb on tarmac. It was time for a GU gel, and I found the three I had taped on the top tube had been ripped off, probably by someone in transition. I was sad that this happened, as I’ve never lost even a pin in transition anywhere else.

Back at transition, there was a festive mood. Now that the tourists in all shapes and sizes had landed up at the Tal, I quickly dropped off the bike and started running. The run started in the same direction as the bike ride. We climbed a hill for 2-3 km after a flat section and then climbed back down the hill. We then went around half way (4.5 km) to the other end of the lake to the finish carpet. I finished in 3.50 hrs. One hour after the winner, so I guess I was not in a rush or could not really rush it.

You know this is a great event when the sponsors are ICEBERG super strong beer and winners on the podium are given a bottle each along with the prize. This was an overall great event, with a well-marked course. Like all events in Nepal prepare for the hills.

A self-described “destination” triathlon, Himalayan Rush does not pretend to be more serious than it is. The atmosphere on Race Day was fun, vibrant and relaxed. No cut off times meant that athletes could take as long as they wanted to finish the course, and most spectators stayed on to cheer. Among the spectators were three goats, which comically surveyed the scene, getting in everyone’s way until one of the organisers were finally heard muttering under his breath that he was going to turn them into mutton curry.

As opposed to the usual announcements at race events that announce the athletes as they cross the finish line, the loud speaker at Himalyan Rush stated things like this: “If you like fresh coconut, there’s a small guy here, please buy coconut from him,” and sure enough a while later, a short local man carrying a plate of fresh coconut was spotted. To stay consistent with the theme, the winners were handed bottles of beer during the awards ceremony. They also received personalised mini Khukuri trophies, a typically Nepali token that serves as a reminder of the cultural aspects of the race. The local people play a huge role in a home-grown event like this. As the course meanders through Pokhara, participants encounter children playing cricket on makeshift pitches and women working in the green paddy fields. A female participant from Delhi was back for the second year, and told us an anecdote from her first experience at Himalayan Rush last year. The participant had needed salt and water to finish the race, and a Nepali woman had run into her home to get her some.