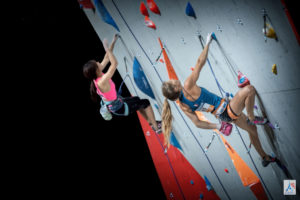 After much anticipation, the doors of the AccorHotels Arena opened today for the first round of the 2016 IFSC Climbing and Paraclimbing World Championships in Paris.

The atmosphere was electric, and the Athletes did not disappoint. At the end of the day, familiar faces were leading the scoreboard.

wowed his home crowd as the only Athlete to flash all five problems.

Women Lead: Six Leading the Way
Our Lead Athletes authored a similar story. The top five Women in the 2016 IFSC Lead World Cup rankings are tied for first after the first round in Paris, along with Austrian Jessica Pilz. Anak Verhoeven of Belgium, winner of the most recent competition in Arco and 2016 Lead World Cup frontrunner, continued her momentum on Day One. Jain Kim of Korea, the reigning Lead world champion, also clipped the chains today.

Paraclimbing : Multiple Tops
In Paraclimbing, Elodie Orbaen of Belgium is again the frontrunner for Women RP3 (limited range, power or stability), but Oriane Moreno tied the 2014 world champion in Route 1. Multiple Women reached the Top in AU-2 (forearm amputees), including Melinda Vígh of Hungary and Maureen Beck of the USA. In Women AL-2 (leg amputees), 2014 runner-up
Kate Sawford looked strong, joining Esme Harte of Great Britain and Luci Jarrige at the Top of Route 1.
For the Men, the Frenchmen fared well in the visual impairment categories. Nicolas Moineau matched 2014 world champion Koichiro Kobayashi in Men B1, while Mathieu Barbe led the way in Men B2, along with Simone Salvagnin of Italy. Several strong Athletes completed the first Qualifications route for Men AL-2, including Urko Carmona Barandiaran of Spain, who won in Paris in 2012. Men RP1 was more decided, with Korbinian Franck of Germany the only Athlete to match on the final hold. In Men RP3, Mathieu Besnard is on track to defend his world title in front of his home crowd, and Mehdi Pahnavar

could bring home Gold for Israel in Men RP2.

Coming up for Day Two:
The action continues tomorrow with Qualifications Route 2 for Paraclimbing and Lead Men at 9:00, and Bouldering Women at 10:00 (GMT+2). Starters and Results can be found on the dedicated Climbing and Paraclimbing event pages.