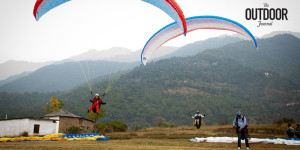 2 years after successfully hosting the paragliding pre-World Cup amidst the mountains of Himachal Pradesh, the mega tournament will now be held in the country for the first time.

August 21: India will host the Paragliding World Cup 2015  in Kangra district of Himachal Pradesh, which is considered one of the finest aero sports sites in the world.

“India bid to host the World Cup and won because of the sound infrastructure that was set up at Bir-Billing (at 2290 mts in Himachal Pradesh) for the paragliding pre-World Cup-2013. We were recently informed out India’s selection. The paragliding community is thrilled with this development,” Suresh Thakur, vice-president of Billing Paragliding Association told The Outdoor Journal over phone.

The organisers are expecting around 150 top ranked pilots of the world to compete, besides the presence of several other free flying pilots at the venue. Thakur said some of the key reasons behind India’s successful WC bid was the state-of -the-art infrastructure required that includes two helicopters on standby for rescue and retrieving during an emergency, having the takeoff and landing sites as per international standards and trauma vans.

He said that the organisers would also try and have a live tracking system facility that would help ensure safety of the pilots. This facility also helps in rescue and retrieve operations in case of any emergency. “With live tracking paragliders across the world can keep track of the competition in real time,” Thakur explained.

The competition site would be developed so that at least 100 gliders can take off at one time. Right now, the capacity is to accommodate the take off of 30 to 40 gliders. The landing site at Bir is also being improved. “The budget for the Paragliding World Cup 2015 should be around Rs 3.5 crore (approximately USD 635,000 ). We expect the local government to help us with funds and in setting up additional infrastructure,”, Thakur added.