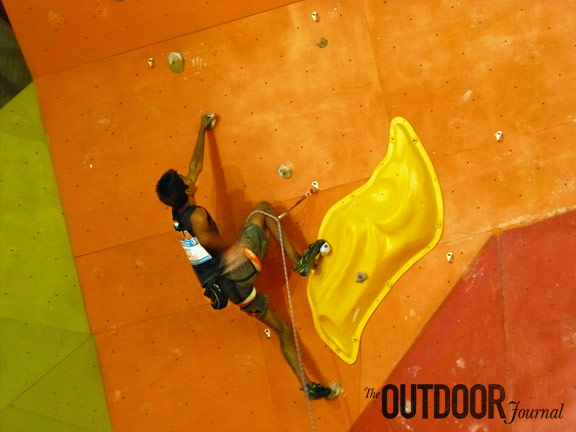 Seven extraordinary teenagers, brimming with passion for the sport, were selected from the Indian National Climbing Team. They successfully trounced climbers from Thailand, Hong-Kong and Chinese Taipei at the climbing competition, which took place in Hamadan, a town 300 kms away from Tehran.

Seven finalists from India were chosen in a selection camp at the Indian Mountaineering Foundation (IMF) and included the likes of Tuhin Sartarkar, Chea Amelia, Kumar Gaurav, Nimer Singh, Surjit Singh and Sandeep Maity. These passionate students, who aspire to become professional climbers, came from Manipur, Delhi, Pane and Bangalore.

The Indian Team ranked fifth in the “Youth Speed” event, with Kazakhstan ranking first, out of ten teams. In the “Youth Lead” event, the Indian Team ranked fifth again, with Korea ranking first. The Islamic Republic of Iran ranked second in both events. “The Iranians were very good; I have never seen holds like that in India, they were very modern and advanced”, stated Tuhin Sartarkar, a leading climber of India and a member of the team.

With a little more training, they are sure to become the superpower of climbing championships all around the world.

This was a big step for spreading awareness about Indian rock climbing considering it isn’t recognized as a sport by the government. Some team members compared the landscape to India and found it quite similar; however, there were obvious cultural differences. “Due to security reasons, we weren’t allowed to be anywhere apart from our hotel and the championship venue”, said Sandeep Maity, an avid climber of the Indian team. The female participants were only allowed to wear full-sleeved and long attire, along with headscarves. In fact, a helpful, important cultural note was provided on the event’s website stating the required local dress code as well as the provision of the garments by the organizer. The male participants were allowed to wear the climbing clothes of their choice.

The Indian Team modestly admitted that they could have trained more, even though they climbed commendably. With a little more training, they are sure to become the superpower of climbing championships all around the world.