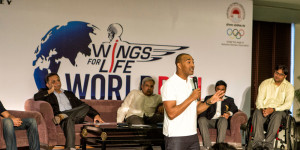 India joins Wings for Life global charity run in May

Aimed at funding spinal cord research, the Wings for Life Foundation has roped in global sporting icons to inspire participants to take part in a unique global event

On a hot afternoon on May 4, 100s of people would start running from one of North India’s sporting hubs Sonepat in Haryana to Karnal, a town roughly 100 km away. These runners will be joined by thousand of others across the world taking part in a unique charity event ‘Wings for Life World Run‘ that is backed by Red Bull in India.

The Wings For Life World Run entered Indian soil on Wednesday with former track and field World Champion Colin Jackson flying in to New Delhi. Jackson was in India’s capital to announce the sporting event that is looking to raise funds for spinal cord research through the Wings for Life Foundation.

Jackson, former 110m hurdles world record holder, is the global race director for the event that would simultaneously be kicked-off at 35 race tracks across the globe, starting at 1530 IST or 1000 UTC.

He addressed a press conference along with other ambassadors of the event – cricketer Gautam Gambhir, shuttler Ashwini Ponnappa, boxers from the Haryana Olympic Association, like Olympian Vijender Singh.

“On Sunday, May 4, the world will witness the most unique race in the history of sports events– Wings for Life World Run. Kick-starting at 10 am UTC – 11 am in London, 2 am in Los Angeles, 6 pm in Australia, and 3.30 pm in India – this one-of-its-kind race will take place simultaneously across different locations worldwide. Over 150,000 runners will race at exactly the same time, regardless of whether it’s day or night,” said Jackson flashing his trademark smile.

With no finish line to end the run, the runners will be chased by a catcher car, which marks the end of the race for a runner as it passes him/her. The catcher car takes off 30 min after the run begins and once it goes past a runner, his/her race is over and he/she is given the final world rank.

“As the race progresses the official catcher cars accelerate (at determined intervals), eliminating competitors as they pass them, until there’s a single man and woman left running – who are then crowned the Global Champions of the Wings for Life World Run. Additionally, there will be country winners; as well as recognition for the last man and woman left on the track in each country,” the 1988 Olympic 110m hurdles silver medalist said.

In order to realise its vision, Wings for Life supports and finances world-class scientific research and clinical trials across the world aimed at healing the injured spinal cord. Moreover, it also facilitates the sharing of scientific knowledge.

“The Wings for Life World Run is not just an exceptional sports event, but also a completely new endurance format for everybody, everywhere. Moreover, 100 per cent of the funds gathered from the race will go towards Wings for Life – a foundation that funds research into finding a cure for spinal cord injury,” Jackson added just before he took to the treadmill.

Competing in the event will be professional athletes, amateurs, medal-winning Olympians, charity ambassadors, and everyone who chooses to participate. Expected to last for six hours, this is a race for runners of all levels. Sports supernovas like surfer Robby Naish and former F-1 driver David Coulthard are also supporters of the event.

Talking to The Outdoor Journal during a post press-meet chat, Jackson said that he was associated with the Wings for Life Foundation because he felt they had the potential to make a difference by funding quality research for a cure to spinal cord injuries.

“As a successful sportsperson one tends to take the body’s fitness for granted. Sometimes, one does not realise how many sportspersons suffer from spinal injuries for the rest of their life. This idea germinated about four years ago and it has taken time to develop into a never-before-done sporting event. I believe that all the money collected globally will be devoted only for research and clinical trials for a cure to spine injuries,” he said.

Explaining how he plans to go about monitoring the clockwork precision of this global event, Jackson said he studied the way the Union of European Football Associations (UEFA) holds its international matches that begin in different cities at the same time.

Asked if he saw more world class athletes emerge from India’s billion plus population, Jackson said, “The key this is that you have genuine role models to look up to and they have the aspirations to be as good as their icons. There is no doubt in india that you have a potential World Record holder”.