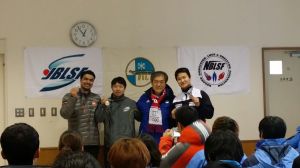 The 17th Asian Luge Championship was held recently in Japan, where India was represented by its largest ever 6-member contingent for the high-speed sport.

Shiva Keshavan added another international medal to his kitty with a silver at the 17th Asian Luge Championships in Nagano, Japan.
The contest was closely contested by three top contenders: Hidenari for Japan posted a best time of 49.791 seconds, Shiva Keshavan from India followed with 49.934 seconds and Kim from Korea was not far behind with a best time of 50.178.
The track conditions did not favour Keshavan as he could not capitalise on his better start timing despite a neat run at the 17th Asian Luge Championships.
“Hide was practically unstoppable today. I was really happy with my race as I gave it my best shot.” said Keshavan after the medal ceremony.
Ex-Luge champion Duncan Kennedy who has been coaching Shiva for less than a month is already planning the future course of action. “We have made good progress on Shiva’s comfort level on the equipment and it is showing in his consistency. We still have a lot of progress to make in aerodynamics as well as overall equipment, through materials and technology, over the next few months. There is also room for improvement at the start, so we are in a good place right now keeping our long term goals in mind,” he said in a statement.
Shiva’s Asian records – the start record of 3.191 seconds and his speed record of 134.3 kmph remains unbeaten.
The Class B Asia Cup also saw Murlidhar Negi from India finishing 9th. In the Ladies’ Class B Yuvavanti Negi, Nikita Thakur and Jahnavi Rawat finished 4th, 5th and 6th respectively while Dev Thakur from India participated in the Men’s Class C category.