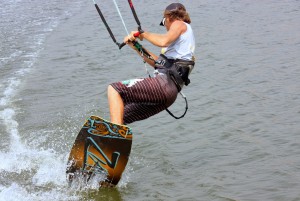 With participants from all over the world, the Indian surfing is getting recognition from the Asian Surfing Championship organisers as well.

The India Surf Festival 2015 kicked off on the Ramchandi beach on Saturday with over 70 surfers from India and other parts of the world, including 20 female riders.

The event was inaugurated by Ashok Panda, Ministry of Tourism Department, Government of Odisha. , “I am excited to see surfing grow in Odisha. We have so much potential,” he told the gathering at the beach that comprised athletes, support staff, festival goers and locals.

Diipti Jhangiani, a freelance journalist from Mumbai said, “The set-up for this event is incredible. The organizers really haven’t held back.

Surfers from Covelong Point, a surfing village in Tamil Nadu, South India, showed their skills on the SUP and quickly set the standard. Only top 2 participants from each heat were selected, who’d now compete against each other. A total of 14 surfers were short-listed for the SUP Cup Championship.

It was cold, windy morning when 23 participants of the surfing competition were ferried to the venue on a fishing boat. The surfing spot for the India Surf Festival 2015 is about three kilometers off the coast of Ramchandi Beach where Kushabadhra River meets the Bay of Bengal.

The competition was in eight heats and two surfers from each heat who tamed the highest point waves with their maneuvers proceeded to the next stage.

Kamal, a Russian who has adopted an Indian name and is now based in Puri has been surfing for more than 10 years in this region. He said, “This whole beach was covered in forest when I came and I have never seen any local surfer practicing regularly in spite of having such a nice beach and regular big waves in the vicinity and it is still untapped”.

Tipi Jabrik, President of ASC (Asian Surfing Championship) and Tim Hain, General Manager of ASC, said they were”stoked” to be at the India Surf Festival 2015.

Surfers were getting waves  up to 3 ft (1m) high and were able to make the most of them. Philippines based Michael Eijansantos who is Managing Director/Editor-in-Chief of My Life on Board was also present at the venue. “My Life on Board (mylifeonboard.net) is doing a fantastic work in promoting Philippines as the best board sports destination in Asia,” he said.

Around 1 pm, four surfers made it to the final. Surfers who made it the final are Viqhesh, Manikandan from Covelong Point, Sekar from Covelong Point and Mukesh from MuMu Surf School. Sekar trimmed the waves twice in the end which Tipi Jabrik, President of ASC, appreciated and Manikandan treated the spectators with three snaps. Mukesh, founder of MuMu Surf School, Mahabalipuram had a cramp on his left thigh in his previous round. On this, Melville Smythe, one of the judges & founder of Waveriders & Dolphin Yachting,

Vizag said, “Surfers do not participate in regular fitness sessions and they experience such cramps quite often”.

Some of the category titles to be awarded in surfing festival are best combo (best tricks/skills presented by a surfer), best barrel, funniest wipe-out and most promising surfer.