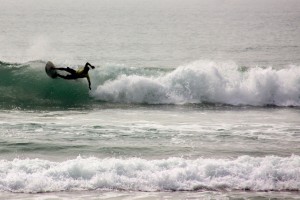 Three surfers from the Tamil Nadu based surfing school storm the podium with their endurance, skill and agility while taking on the barrels on Odisha's coastline.

The sight of Sekar, Dharini and Manikandan chopping waves deftly on the surf board and Stand Up Paddleboard was a picture of surfing perfection on the last day of competition at the India Surf Festival 2015.

Seven power-packed participants were part of the final round and adrenaline surge was apparent among the surfers who had lined up on the beach front to make a dash for their SUP boards. The one km race was not just about endurance and strength but it demanded skill as participants maneuvered through rocks and negotiated turns.

Giving away the prizes to the SUP winners, Paul Heyman, from the UK representing 360 paddleboarding said, “I am surprised to see the sport being picked up in India up to this level and it is only going to rise. I would want to come to India again next year”.

Mr Heyman and his team will explore the feasibility of paddleboarding in Chilika Lake, Odisha for a week after the India Surf Festival 2015 ends.

Covelong Point proved to be heroes on the surf board too with a clean sweep of the competition.

Tipi Jabrik, President of ASC (Asian Surfing Championships), who gave away the prizes to winners in surfing said, “This is my first time in India and I am stoked to see the welcoming and ever rising surfing community here at the India Surf Festival”.