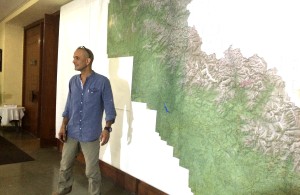 Covering most of north India, the 17 x 17 feet map was created by explorer Depi Chaudhry to fill the need for a ‘good trekking map in India.’ Digital versions of the map will be out soon.

When Depi Chaudhry is not busy exploring a remote region in the Himalaya or cycling on desert trails in Rajasthan, he attempts to make maps.

On Saturday evening, at the Indian Mountaineering Foundation headquarters in New Delhi, the adventurer-cyclist-trekker unveiled what he believes is the ‘largest trekking map on the Indian Himalaya in the world.’

“It isn’t easy trying to put up something like this, I have been working on it for the past four years,” the author of Collins Guide To Trekking in the Western Himalayas explained to a gathering at India’s apex mountaineering organisation.

“I found the existing guidebooks were not good enough, the maps were lacking. If someone had a Survey of India map, I would go running to that person, scan bits of it, and try to stitch it together. It used to be a struggle, each time you tried planning a trek. There were limitations, because we didn’t have enough GPS data. So if we looked at going from 3000m to 4000m, it would be a straight line.”

The map has a resolution of 1:130,000, and has been overlaid manually with GPS data collected over time. Detailed Survey of India maps for the Himalayan region are not available in the market.

“I tried doing different things. I was putting things together, taking photographs but it was not good enough. I came across a software called Open Cycle Map. I wrote to Andy Allan, the creator of this wonderful layering software, and he was kind enough to allow me to use it giving him credit for it. He probably did not realise that a madman was going to try to stitch together 30,000 images, all of which is available on Google and other places on the net, putting in manually with GPS data with each and every line and data on it.”

IMF president Col. HS Chauhan told the audience, “This map will hopefully lead people to seek remote treks. Treks and expeditions like Stok Kangri, Valley of Flowers, Everest are so popular, that everyone wants to do just them. We hope that people become curious enough to explore lesser-known areas.”

The maps will soon be available in a downloadable PDF format on himalayamaps.com. Tata Consultancy Services (TCS) is partnering with Depi to develop an application which aims to be a crowdsourcing platform for trekkers to put in data as and when they find it.