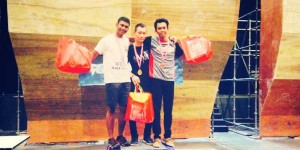 The New Delhi-based climber stood second in the Open Category at Rockmaster 2014, making it his first win at an international event.

This was Sandeep’s first medal at an international event and comes on heels of his victory at the  IMF South Zone Bouldering event in Bangalore.  Thrilled with his maiden international medal Sandeep, an athlete backed by The Outdoor Journal, said from Singapore, “There were 56 climbers in my category. Only eight qualified for the finals. When I was training onsite, I didn’t expect to make it. Everyone seemed so much better than me, I was so nervous! But I had put in a lot of hardwork, and I am totally satisfied with my performance. Can’t wait to win more!”

The last round required the finalists to climb three routes, in 3:30 minutes each. Although Sandeep did not complete any route, he won points for making more moves in minimum attempts.

Sandeep has won prizes at national climbing championships, and has a few notable ascents to his credit, including a first ascent of an 8a in Mumbai, called Good Bad Ugly.

Rockmaster is an annual, non-profitable event organised by Singapore Polytechnic Rock Climbing Club. The ten-year old event aims to bring together local climbers from different institutions in Singapore with climbers from neighboring countries. This time, the competition had five categories, out of which the Open Category was meant for international climbers.