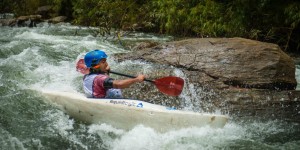 The confidence to take on class V rapids and international athletes at the grand stage of extreme kayaking comes from winning competitions back home and the support he gets from paddlers across the world.

India’s best competitive paddler Ayodhya Prasad is in Austria to participate in the Adidas Sickline 2014 – the extreme kayak world championship. He is the second Indian paddler ever to compete in the coveted tournament in which the best kayakers from across the world race it out on various rapids.

The 24-year-old kayaker made his way to his first-ever international extreme kayak race after winning the Ganga Kayak Festival (Rishikesh) and Malabar River Festival (Kerala) — competitions held in India’s whitewaters – in the past two years.

“Ayodhya is training for the legendary Weller Brucke section in the Adidas Sickline 2014. He will run it between October 2-4 during the mens’ category races,” his mentor and renowned Indian kayaker Bhuwan ‘Eddy’ Adhikari told The Outdoor Journal from Austria.

The Weller Brucke rapid is renowned for testing extreme kayakers with its fierce waters that form out of Austria’s glacier-fed Ötztaler Ache River.

Eddy’s firm De-N-Ascents Expeditions is his main sponsor and Kanushule Versam, Switzerland is sponsoring the Lettmann Grennate boat for the competition.

Named after a Hindu religious town in India, Ayodhya is being trained by 3-time Adidas Sickline champion Sam Sutton at the competition venue. Sam, a Kiwi paddler, met his Indian counterpart at the Malabar River Festival in Kerala in July this year where he powered past the defending champion Ayodhya and won the title of ‘Rapid Rajah’ 2014.

Ayodhya, who lives in the British built hill-station of Nainital in North India, was sent to the Sanskrit School in Rishikesh to study Vedas but he soon found himself rafting and kayaking on the rapids Ganges river.

“He is one of the fastest and technically good whitewater kayaker that India has produced. The disadvantage for him in such a high level competition is that he is pitted against the best in the world who have slalom paddling experience and are from places where infrastructure to practice exists,” says Manik Taneja, kayaker and organiser of the Malabar River Festival, while also wishing him luck for the competition.

A month prior to his departure for the Adidas Sickline 2014, the Indian paddler was on an exploratory trip across India along with four British expedition kayakers who were following the monsoon trail and doing first descents of rivers from the south to the north east of the country.

When he is not strapped into his ‘skirt’ and training to be a world class boater under the 3-time extreme kayaking world champion, Ayodhya can be found relaxed by his camping motorvan parked on a grassy meadow near the Otzs Valley in Austria.

Keep an eye on this space to follow the young Indian kayaker as he takes on the world’s best paddlers at the Adidas Sickline 2014.