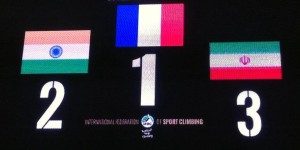 This is his fifth medal in an international event in three years despite almost no support from the Indian government.

Mathieu Besnard of France won the top spot, while Benham Khalaji of Iran came third.  All three winners – Besnard, Kumar and Khalaji tied at the top spot in the semi-finals.

On winning the silver, Mani said, “I was fully confident of winning the gold, but don’t know what happened when my hands slipped from both holds. But I’m happy with whatever I could do, and am even more determined to win medals in the future.”

This was Mani’s fifth win at an international event in the last three years. He has previously won gold at the 2012 IFSC Paraclimbing World Championship, held in Bercy, Paris.

Manikandan’s journey to the podium this year was a tough one. Despite consistently making waves at international competitions, he had to run from pillar to post to find sponsors to fund his airfare and expenses for the event.

Moreover, Indian officials seemed unimpressed by his achievements, and felt that it did not deserve financial aid.

Col. Ajit Dutt, chairman of the sport climbing division at Indian Mountaineering Foundation (IMF), told The Outdoor Journal, “IMF doesn’t provide any special funding for sport climbing. We will honour Mani with a certificate and compensate him financially when he comes back, just the way we did when he won gold in Paris in 2012. Taking care of his expenses is not our responsibility. It is the responsibility of the IMF South Zone administration.”

The IMF is India’s apex body for supporting and promoting mountaineering, rock climbing and related activities. The IMF is divided into several zones, primarily north, south, east and west. Wing Commander Sridharan, chairman of the South Zone, when contacted, said, ” We have requested GETHNAA to reimburse Mani for the expenses incurred during the championship this time. We are waiting for them to respond.” General Thimayya National Academy of Adventure (GETHNAA) is an autonomous body of Karnataka’s state government, responsible for promoting adventure related activities.

Kumar Gaurav, a budding climber based in New Delhi and aspiring to be a climbing champion was ecstatic about his idol’s win in Spain. Explaining his future plans, he said, “I am training to compete at 20 international events by 2018. My 21st event will be the 2018 IFSC World Championship.” When asked about funds, Gaurav said, “I don’t know. So far I’ve been using my own personal funds.”